In Cambodia, a Common Rose 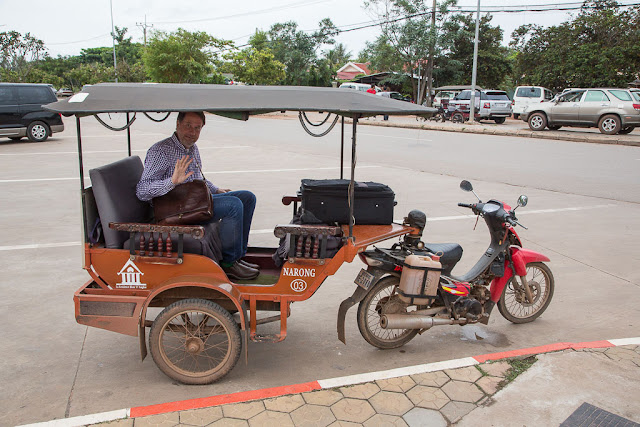 We're in Siem Reap, Cambodia, after a long, LONG flight via Ho Chi Minh City (aka Saigon). We are lying by the pool at our hotel waiting for our room to be prepared. The desk clerk said we have the "James Bond Room," which confused me until I realized he meant No. 007.

The flight went smoothly. I finished two books and an issue of The New Yorker. If you haven't read the article about young people and the culture of live-streaming, go check it out. It was the most confounding thing I've ever read. The idea that people pay money to watch someone go about his or her daily life, for hours, and also come up with numerous (and sometimes dangerous) ways to harass that person -- well, it just makes me realize there's a whole universe of stuff going on out there that I never imagined. And it makes me think, like any old curmudgeon, that the world might just be going to hell.

And also, what is up with people and carry-on luggage? A woman on my flight had FIVE carrry-on bags -- two backpacks, a roller bag and two shopping bags.

But anyway, never mind my grousing -- because we're in Cambodia! 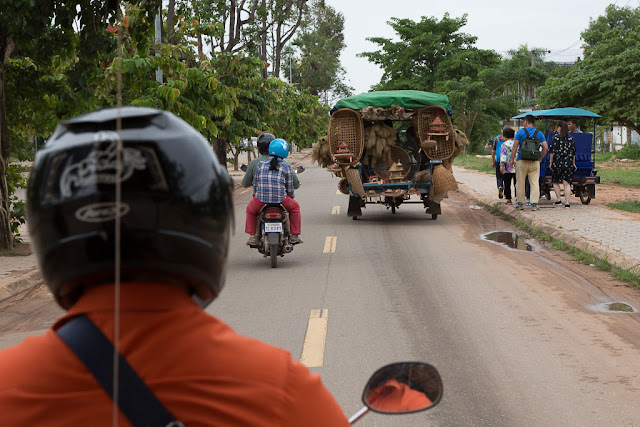 The airports in both Saigon and Siem Reap are gleaming, modern structures -- Saigon's could be pretty much anywhere, with its gleaming stone floors, glass walls and numerous flat-screen TVs. (Granted, they were showing K-Pop boy bands.) I got a bit concerned when my bag wasn't immediately evident on the luggage carousel in Siem Reap, but turns out it just fell off the belt and was lying behind some equipment. A guy from the lost & found desk located it promptly!

The thing in the top photo is a tuk-tuk, the driver of which picked us up from the airport and took us to our hotel. Dave may look concerned, all folded up inside it, but he was hamming it up for the camera -- he was actually very excited to ride in one. The second photo was the view from the tuk-tuk on the way to the hotel. Lots of interesting vehicles on the road! 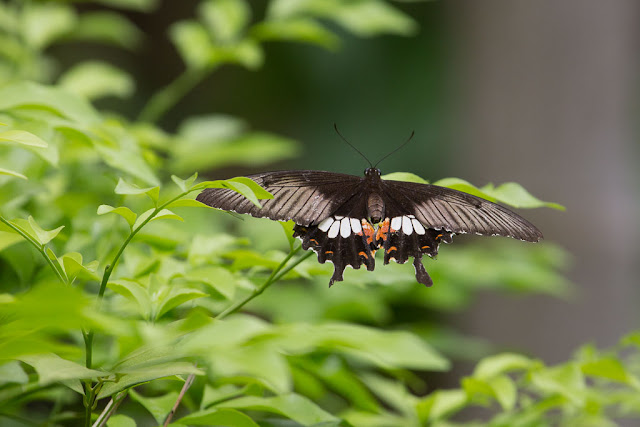 Soon after we ensconced ourselves here at the hotel pool, this large swallowtail butterfly floated past and landed on a shrub near our chairs. I think it's a type called a "common rose," although I am certainly not an expert on Cambodian butterflies.

I feel dead on my feet, but I'm afraid to go to sleep for fear I won't sleep tonight. So that's the challenge -- staying awake for the next eight hours!
Posted by Steve Reed at 6:20 AM