So this is where we’ve been the past two days — floating among the bizarre, steep-sided limestone islands of Halong Bay.

After our brief overnight in Hanoi, we caught a bus early Saturday morning and rode 3 1/2 hours to the coast. We passed through small towns and villages, and saw lots of people wearing the traditional conical straw hats that so defined Vietnam for earlier generations: 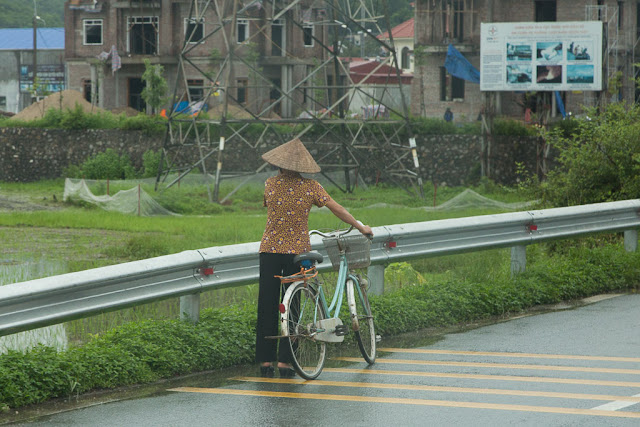 I’d thought they were a thing of the past, but no — they’re still in widespread use. 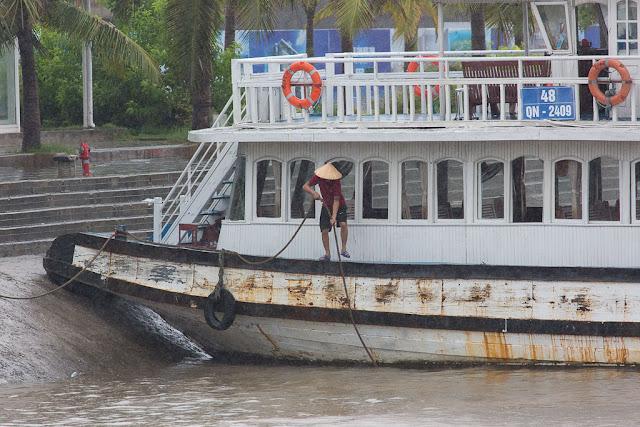 There’s a huge overnight cruise industry in Halong City devoted to ferrying foreign tourists and Vietnamese visitors alike out on the famous bay, which is another UNESCO World Heritage site and was featured in the terrific Catherine Deneuve movie “Indochine.” Our boat was an old-fashioned wooden vessel with two decks and cabins paneled in dark wood — it seemed like the kind of craft the colonial French would have traveled on 75 years ago. 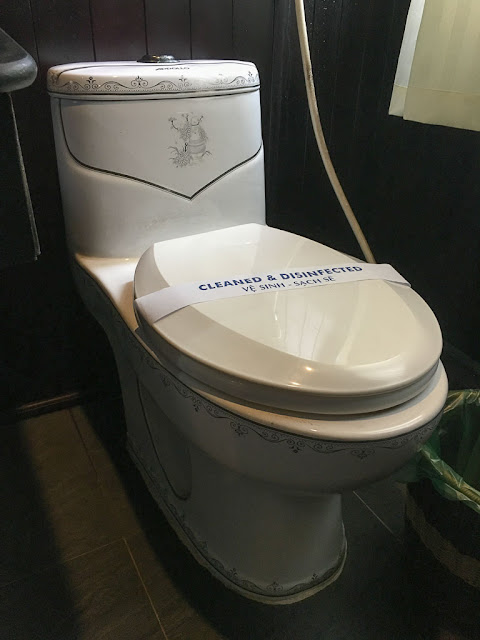 Look at our fancy toilet!

Each cabin was equipped with a fire extinguisher and a hammer to break the window in case of emergency. (“But the boat is very safe,” our guide reassured us. Ummm…OK.) Dave and I had a room with a rear-facing balcony, but overall everything was more rustic than plush. The shower was cold-water only and the water from the sink ran out onto the floor and into a floor drain. The diesel fumes from the engine were strong enough that the balcony was pretty much unusable if the boat was running. I likened it to a cross between cruising and camping. (We did have air conditioning, thank God.)

I asked how old the boat was, but no one would give me a straight answer. Either they didn’t know or they didn’t want to say. I’m thinking fifty years at least.

So now I know what they mean by rainy season in Vietnam! Holy cow, did it rain. It basically poured all of Saturday, as you can see in the top photo. We had a couple of little excursions — one to a cave on an island and one (Sunday morning, when the rain had lessened) to go kayaking. 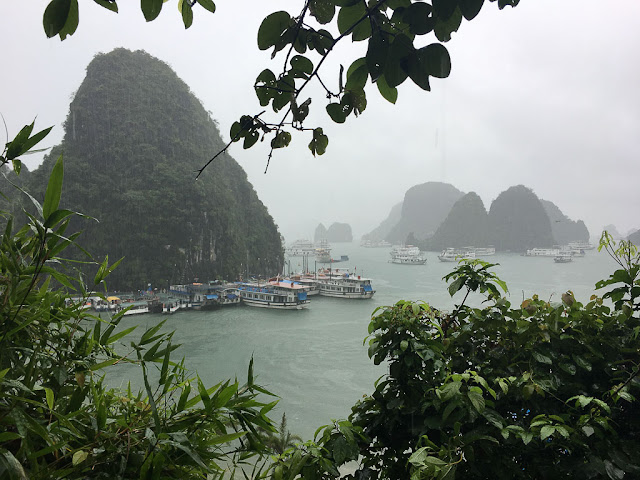 See all that rain? 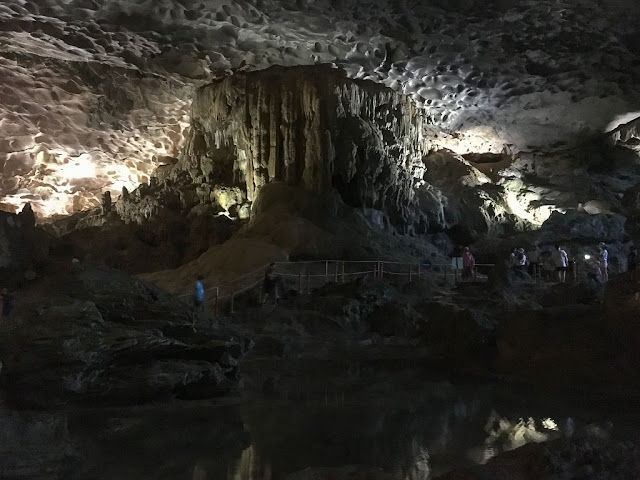 The cave wasn’t going to fill with rainwater, a la Thailand, we were repeatedly assured — and in fact it was HUGE and the openings were large and numerous, so I don’t think it would have been possible. We were advised to wear shoes rather than sandals, which I did, but many of the cave’s internal paths were rushing torrents — so now my shoes are soaked.

But despite this near-constant state of personal damp, it was worthwhile to see such a famous beauty spot. There are 1,969 islands in Halong Bay, according to our guide — he said it was easy to remember because 1969 is also the year Ho Chi Minh died.

On the boat they fed us like crazy — family-style plates of rice, noodles, seafood, chicken curry and other dishes. (I completely failed to take pictures of the food, for which I apologize!) At this point I seriously feel like I don’t want to eat ever again. But ask again tomorrow.