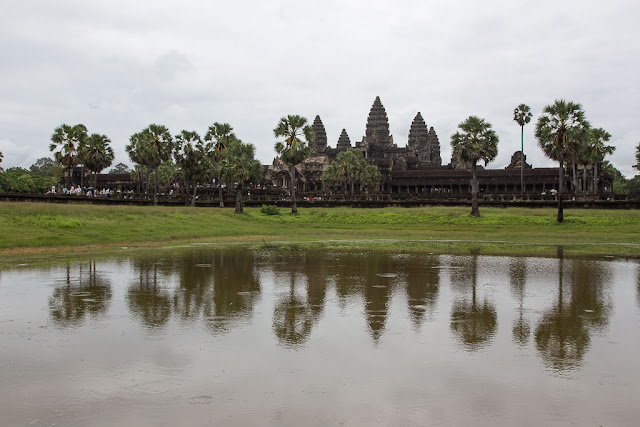 I have wanted to see Angkor Wat for as long as I've known about it. The story is so intriguing -- a medieval lost temple, or really collection of temples, abandoned in the jungle and overgrown by gigantic trees and vines. Evidence of an earlier civilization, but unknown to the wider world until "discovered" by French colonizers of Indochina in the 1860s. It's all very "Indiana Jones."

Of course, I'm sure at least some Cambodians knew it was there all along, but the massive effort to reclaim the temples from the jungle and make them available to visitors who want to appreciate the relics of the Khmers is relatively recent. 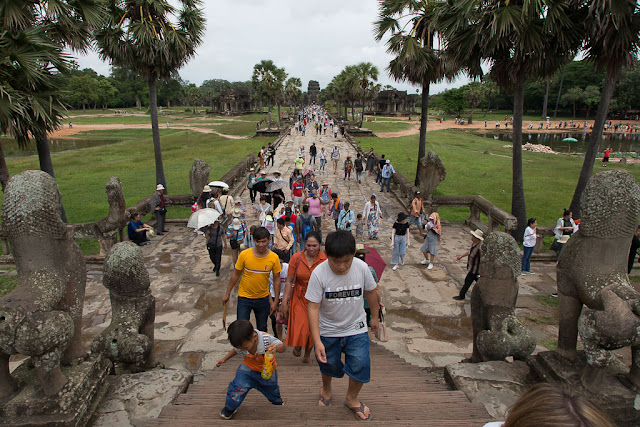 It's a UNESCO World Heritage Site, and since the 1990s it has drawn so many visitors that my guidebook calls it "the Disneyland of Buddhist temples in Asia." There were certainly plenty of people out and about when Dave and I visited, despite overcast skies and humidity hovering around 100 percent. 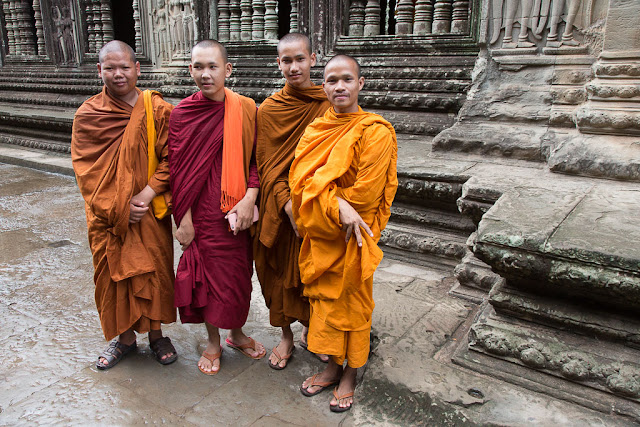 Some of the visitors were pretty interesting! (At first I thought that right-hand monk was flashing a gang sign -- but actually I think he was just adjusting his robes.) 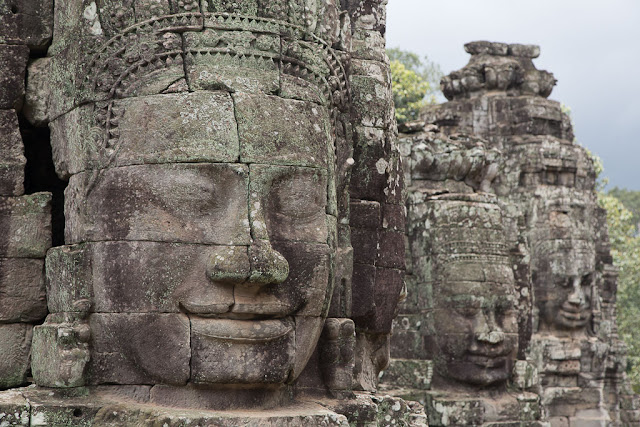 The temples -- both Buddhist and Hindu, depending on who was in power -- mostly date from the period that Angkor served as the Khmer capital between the years 802 and 1295. This one, The Bayon, is known for its many carved faces. The large temple complex in the top photo is the main Angkor Wat, with its famous reflecting pools. 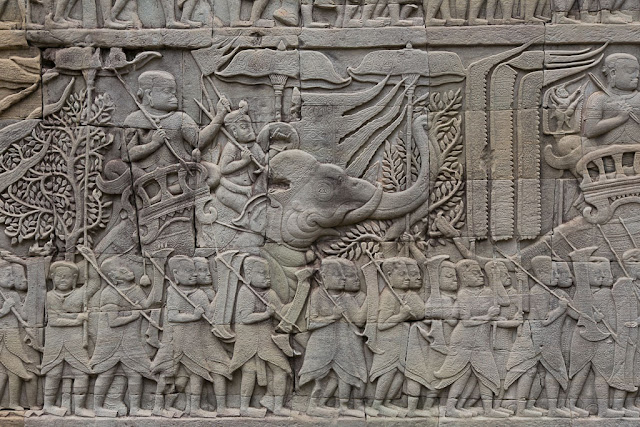 Some of the carvings around the base of the temples are very ornate. And the height of the temples varies, depending on who they're for -- temples for royalty tend to have several levels, according to our guide. 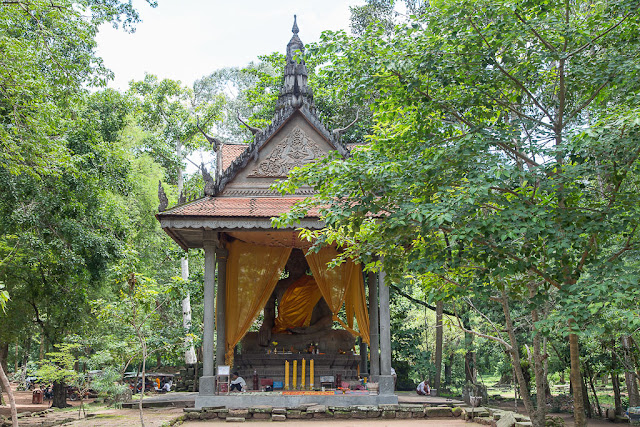 Near the ancient temples are a few more modern ones, like this one featuring a gigantic Buddha statue. Angkor is still an active Buddhist site where people go to pray and light incense. (For a sense of scale, you can see a few people crouched at its base.) 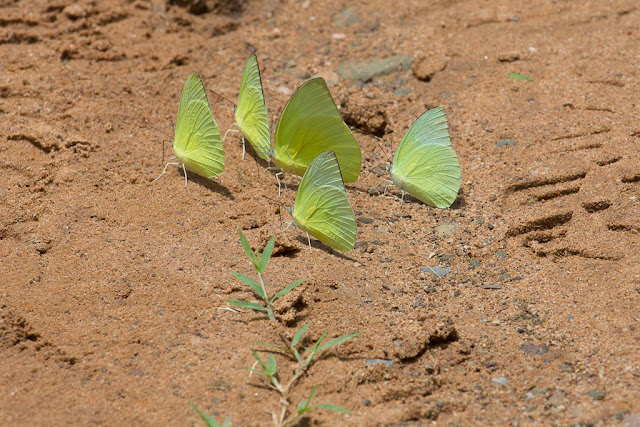 The area around the temples is preserved as a forest, and there's plenty of wildlife. We saw monkeys, lizards and loads of different butterflies, and we heard some very exotic-sounding birds. 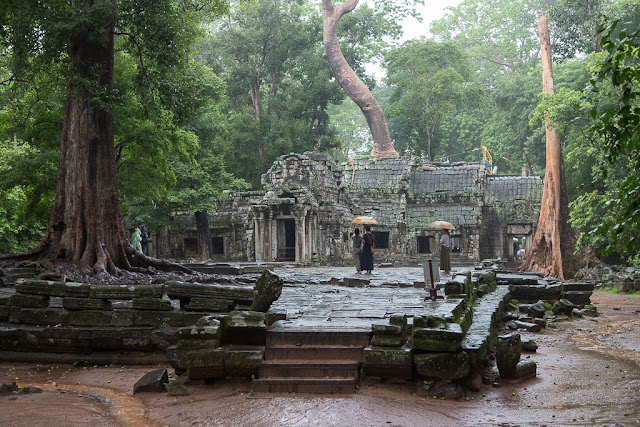 Apparently one of Angkor's most globally famous moments came in the movie "Lara Croft: Tomb Raider," with Angelina Jolie, from 2001. I'd never seen this film, so when our guide kept talking about the "Tomb Raider" temple, Ta Prohm, his references were lost on me. But indeed, the movie was filmed at the temple in the photo above. (By the time we got there it was pouring rain.)

Here's a still from the movie, which we rented and watched last night. It's silly but mildly diverting. (Dave fell asleep.) 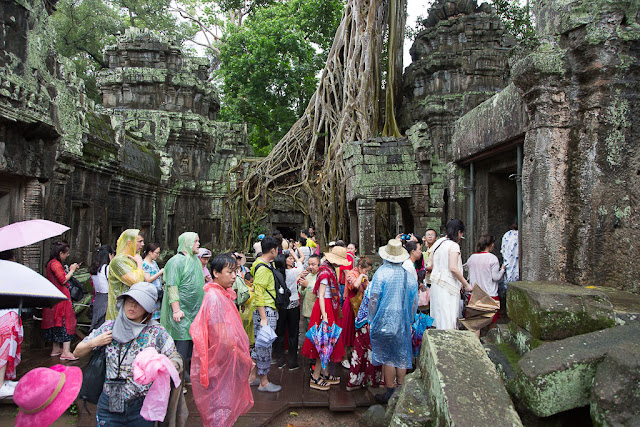 And here's the same location as we saw it, featuring about 100 tourists! Everyone wants a picture in front of that big tree with the tangled roots.

I've got to hand it to our guide, whose name I think was Gou. (I never saw it written down!) He knew all the best photo spots and showed us tiny, subtle elements of the temples that would otherwise be easily missed, like a carving that appears to show a stegosaurus: 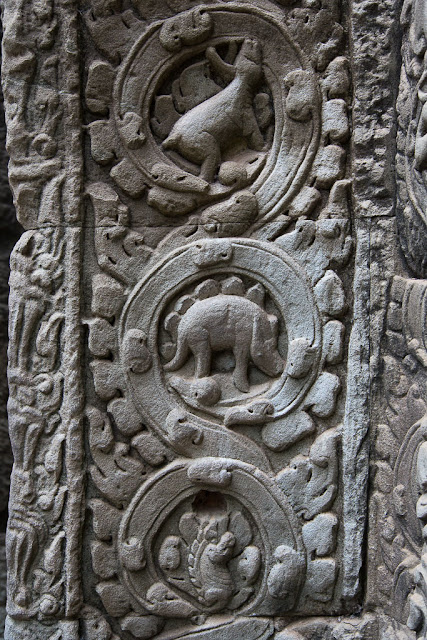 By the time Dave and I got back to our hotel, we were sweaty and exhausted, but it was a great day. We immediately took showers and ordered room service for dinner. I had something called "Bra Hook," because HOW COULD I NOT with a name like that?! It turned out to be a pork-and-vegetable dish with rice and tiny aubergines the size of large peas. Supposedly it contained salty fish, but I didn't detect any. It was possibly obscured by the radioactively hot pepper that I failed to pick out of one mouthful of food -- I ate it and was literally left gasping. My eyes watered for half an hour!

Oh, and speaking of food, we stopped for lunch at a restaurant where I got "banana bud salad," and I'm pretty sure those red pod-like vegetables in yesterday's post are indeed banana buds.
Posted by Steve Reed at 5:52 AM