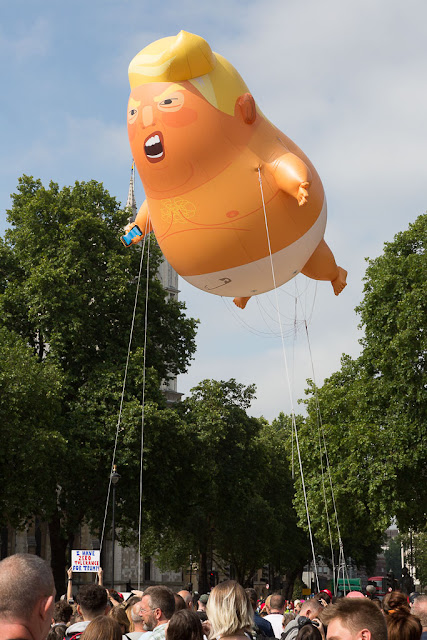 I went to the massive, MASSIVE anti-Trump protest in London yesterday. The crowds were YUGE, whether Trump wants to admit it or not, and it was heartening to see so many thousands of people who cared enough to make signs, march and protest.

In the morning, Dave and I went down to Parliament Square to see the "Trump Baby" blimp, with its tiny hands and Tweeting phone, hover over the crowds. 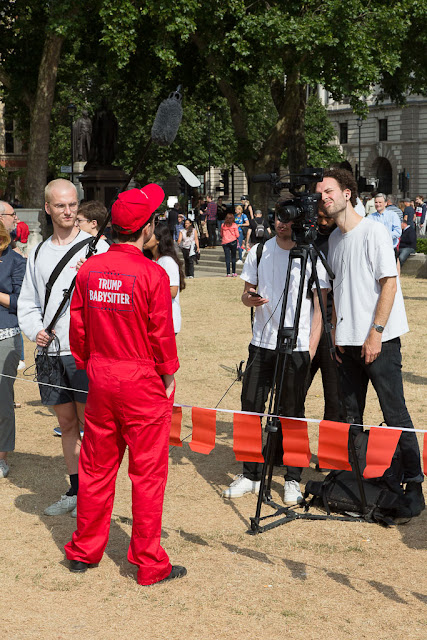 The blimp was minded by "Trump Babysitters" like this one, in the process of being interviewed. There were also pro-Europe flags and ant-Brexit fliers -- for many Londoners Trump and Brexit correctly go hand-in-hand as part of the same wrong-headed global movement.

Then we went back home, and a few hours later I set out for the main march along Regent Street and down to Trafalgar Square. It's roughly the same route followed by the much more glittery LGBTQ Pride parade the weekend before. 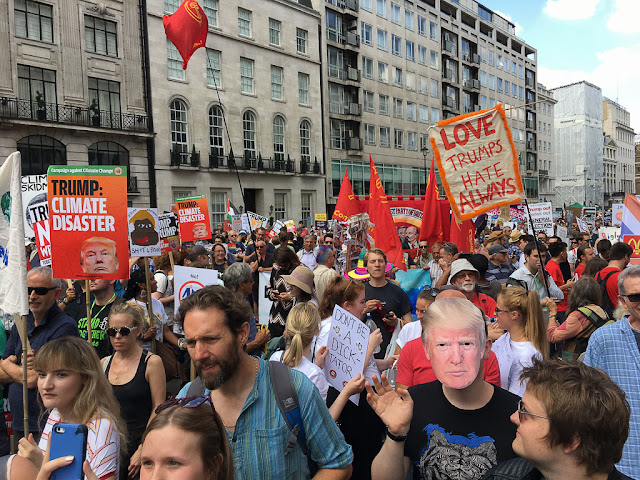 Before the marching began, we congregated along Portland Place, where there were speeches by several people (I have no idea who because we couldn't see them) saying something (I have no idea what because none of us could hear them). This dragged on for about an hour, which annoyed a lot of us, but finally we got moving around 3 p.m.

There were many, many creative signs: 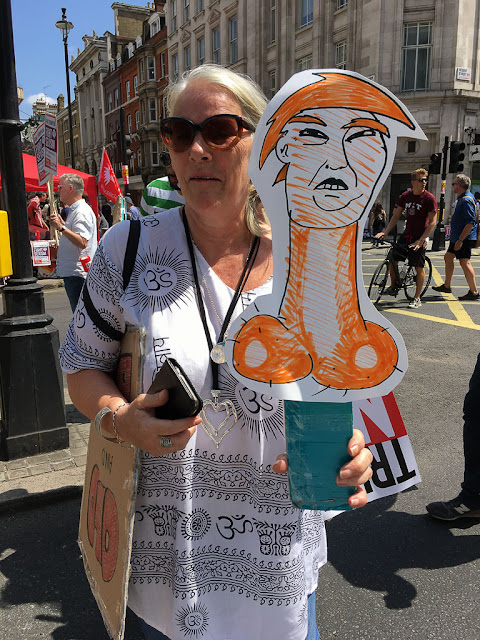 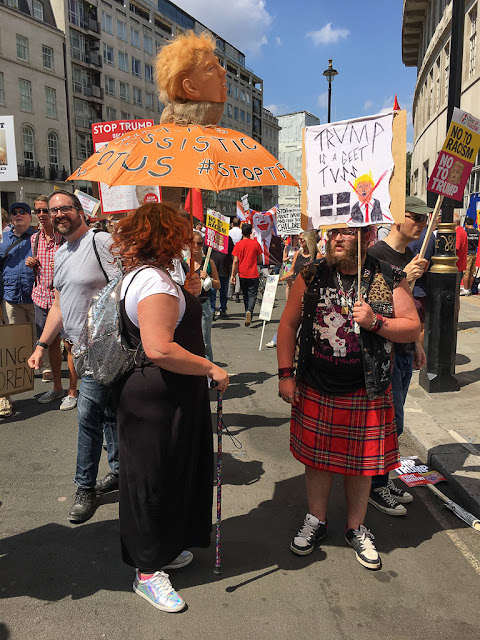 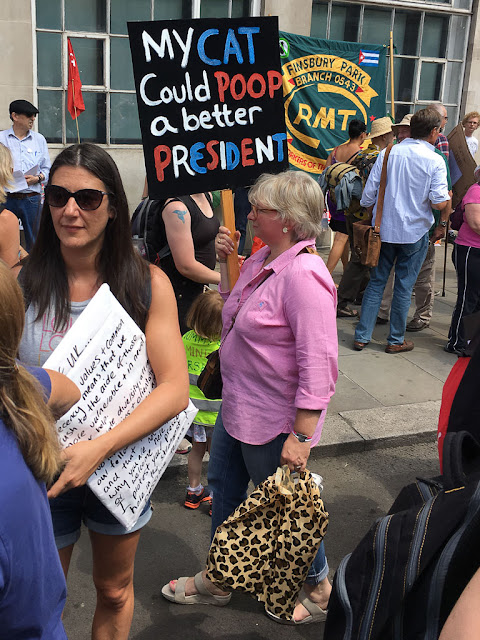 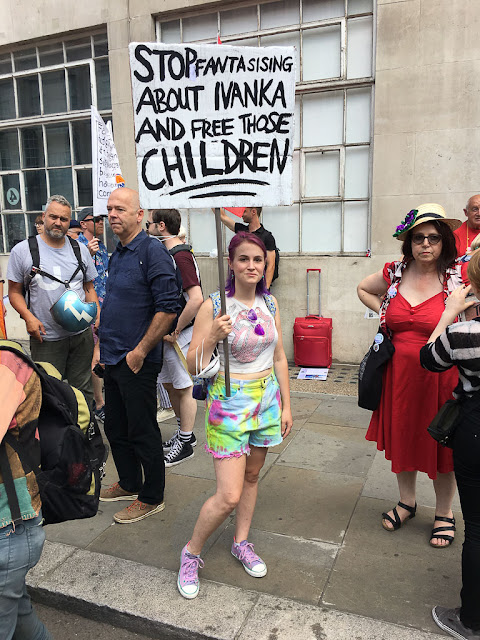 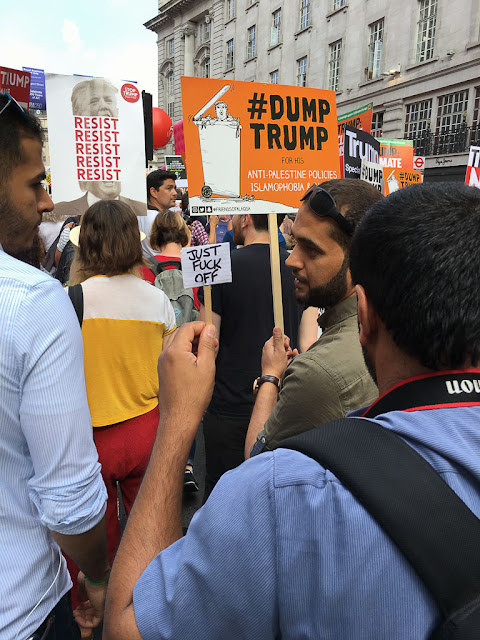 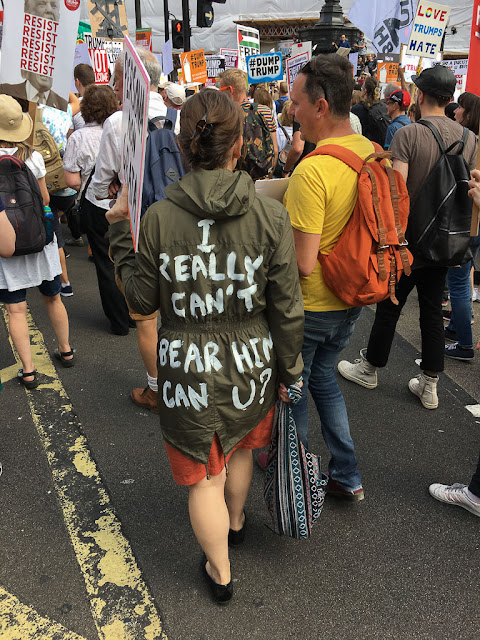 I loved how blunt some of the signs were. For every clever slogan ("God Save the Queen from the Rotten Tangerine") and piece of careful artwork, there were signs that said "Piss Off" or "Fuck Off Nazi Punks." I saw one that said "Fuck Off Pee Brain." Somehow these were even more amusing than the clever ones. 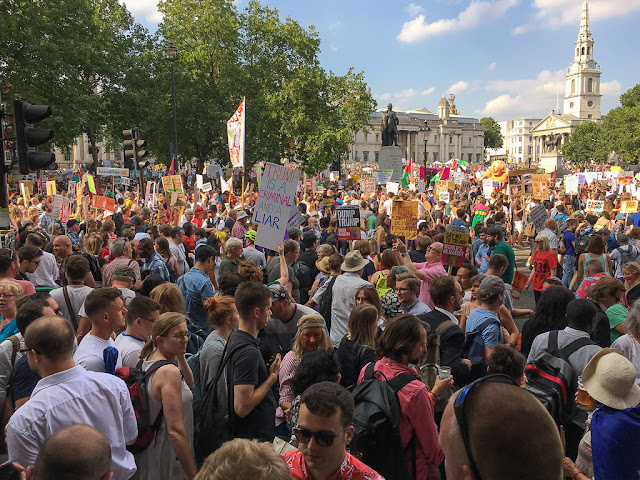 And the turnout did not disappoint. Easily tens of thousands of people -- I couldn't even begin to guesstimate how many were there... 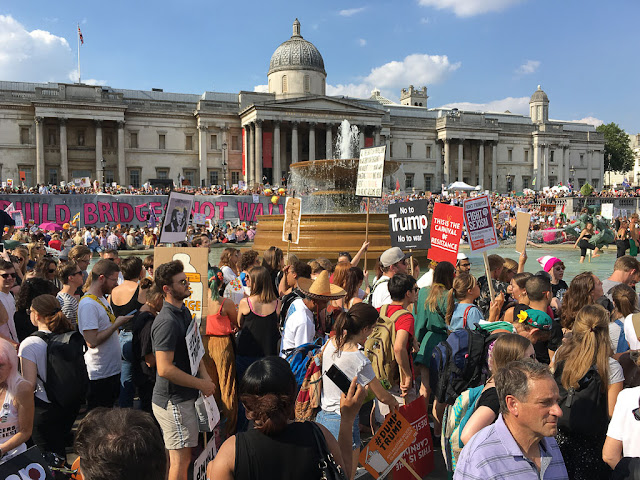 ...but Trafalgar Square and the surrounding streets were full to overflowing. Surely this must be a record demonstration against any sitting foreign leader.

I met up with our pal Mike and his daughter, Sorren, who also marched, and we all went down to Greenwich for dinner. Dave came down by train to join us, and had a little dust-up with some drunk guys on the train who challenged him over a "Bollocks to Brexit" sticker on his shirt (which he got at the Trump Baby event in the morning). Apparently it turned into a big argument among several people on a train platform which, Dave said, the anti-Brexit group ultimately won. Scary!

I saw no sign of counterprotesters at all, though it's been reported that there will be some kind of right-wing demonstration today. I'm steering clear.
Posted by Steve Reed at 7:04 AM