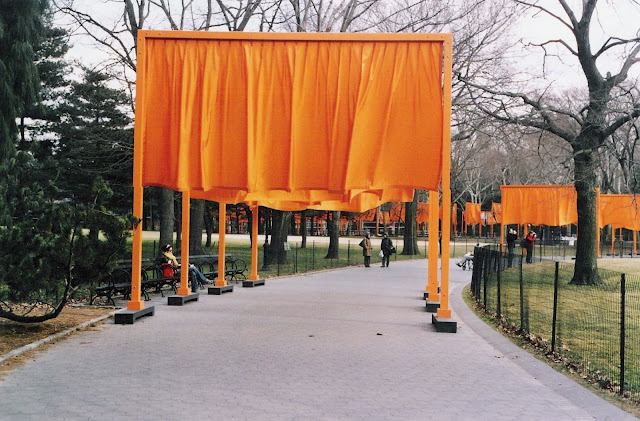 Writing about the Mastaba yesterday made me think of another Christo artwork that I once saw, "The Gates," which he and Jeanne-Claude installed in New York's Central Park. Consisting of roughly 7,500 bright orange, curtained gates across the winding park pathways, the installation lasted for two weeks in the latter half of February 2005.

I lived in New York at the time, and worked near Times Square. As I recall, I zipped up to the park on my lunch hour one day to see The Gates shortly before they were dismantled. I took a roll of film, including these shots.

It was an interesting work. Clearly I enjoyed it enough to photograph it, but I also remember thinking that pictures couldn't really do it justice. I think the enormity of Christo and Jeanne-Claude's projects are a critical part of their impact.

Also, there was an aural element: The curtains made swishing, flapping sounds as you walked beneath them, which photos can't convey. 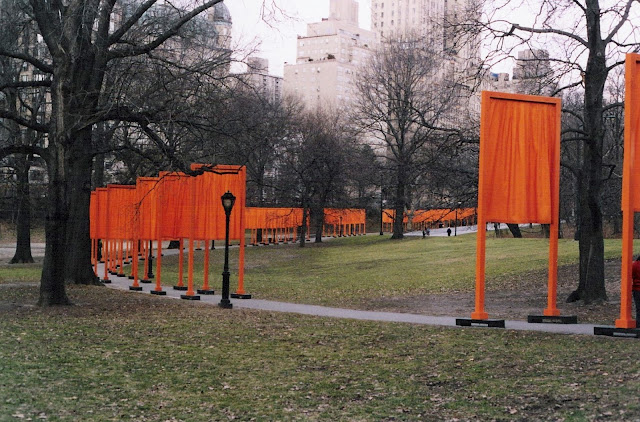 There were volunteers stationed around the park to keep an eye on things and answer questions from visitors. I talked to one of them, and she gave me a swatch of the specially made heavy nylon fabric that curtained each gate. I still have it: 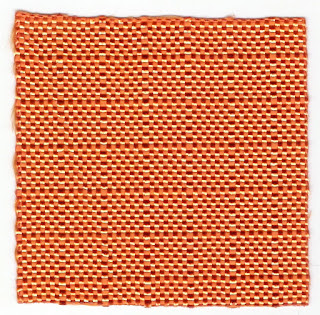 I think the response that many of us have to Christo's art is, "WHY?" And maybe that's the response we're supposed to have -- that sense of wonder, the consideration of what it means to indulge in large-scale whimsy. Implicit in the question is the answer: "Why not?"
Posted by Steve Reed at 6:41 AM