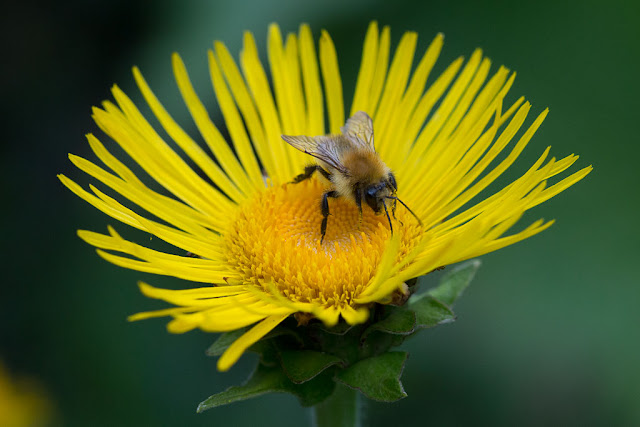 Just a short post today -- Dave and I have to get to school for a faculty-and-staff meeting to kick off the new academic year.

Thanks for all your well wishes on my post yesterday! As soon as I have anything new to report I'll let you know. I'm supposed to see one doctor for a consultation this evening, and another tomorrow.

Meanwhile, life goes on...I spent some time in the garden with the camera yesterday. I was trying to photograph our last remaining caterpillar, but he was in an awkward position behind several leaves so I didn't get any good, clear shots. A bee on the inula was much more cooperative!

I dead-headed some of our other flowers, including most of the ragwort, which has gone to seed and frankly, the last thing we need are a million fertile ragwort seeds blowing around. I don't mind a few ragwort plants, but that stuff is pretty prolific. We have to exert some control. 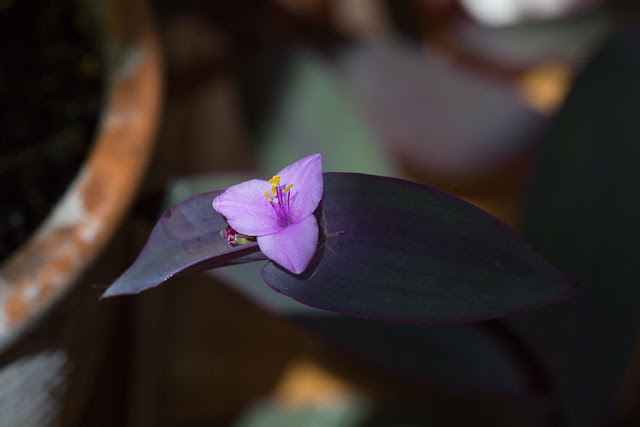 Our purple heart plant is blooming, just inside the back door.

In the afternoon, Dave and I went to see Quentin Tarantino's new movie, "Once Upon a Time...in Hollywood." I really enjoyed it. It's like a 1969 time capsule, with every little detail appropriate to the time period. The story is built around the Manson killings, which ended the sixties both chronologically and psychologically -- but it's also about the period when the old Hollywood of Westerns and gunslingers was giving way to new styles and genres of filmmaking. Of course, it's Tarantino, so there's some brutal violence and dark humor, too. Overall, thumbs up!
Posted by Steve Reed at 6:25 AM