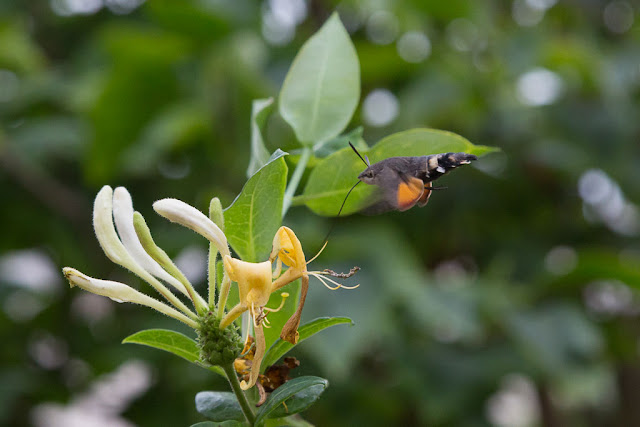 Yesterday evening I was out in the garden when I noticed a large insect buzzing around one of our flowers -- a hummingbird hawkmoth! 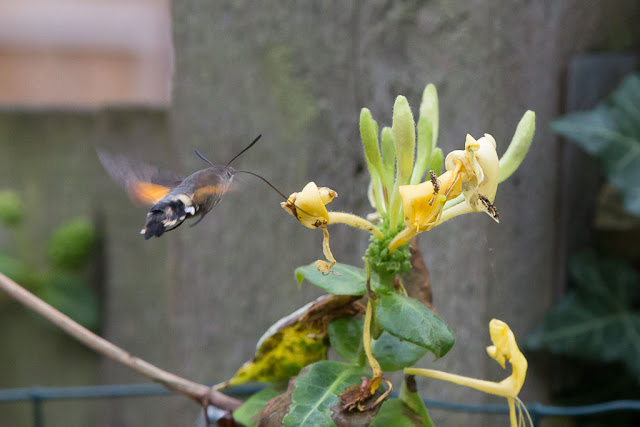 Some of you might remember that I saw a similar hummingbird moth when I was in Florida about a year ago. But I've never seen one here in the UK. Apparently they're fairly common at this time of year. Fellow blogger Mr. Pudding encountered the larva of a related species about ten days ago. 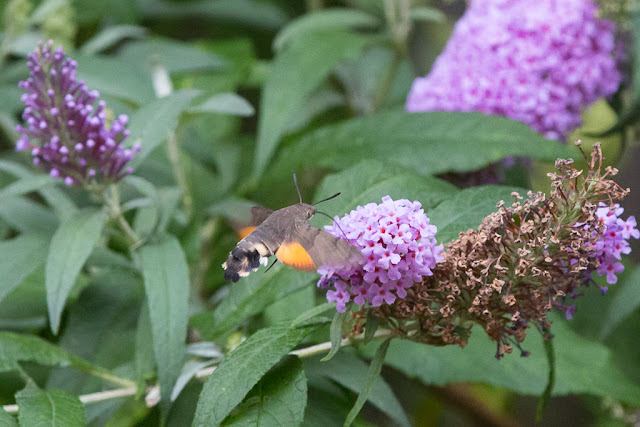 This one loved our honeysuckle, and then it moved on to our buddleia. Apparently these are two favorite food sources. It had an incredibly long proboscis, which it rolled up into a coil when it flew. I could get pictures as it hovered near a flower, but it was very fast zipping between blossoms -- there was no way for me to capture it in headlong flight.

An interesting fact about these moths -- they migrate to the UK from Southern France, Spain and North Africa. Apparently it's too cold for them to overwinter here. They also have good memories (!) and return to the same flowering plants repeatedly -- so we may see this one again. 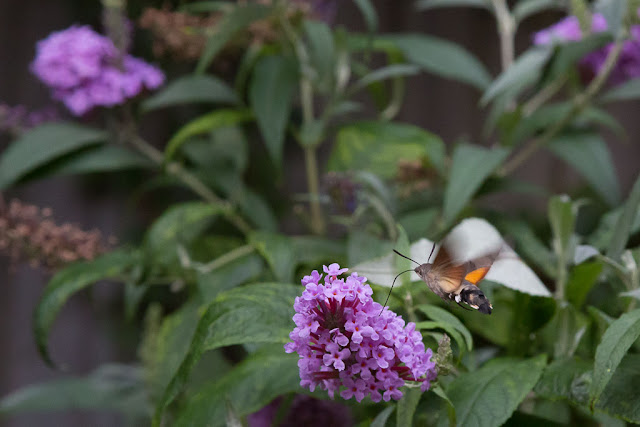 Anyway, it was pretty exciting! I tried to take a video, but I clearly don't know how to operate the video controls on my camera, because I wound up with something that was mostly out-of-focus. I wish I'd had my iPhone handy.

Dave made some fabulous beef stroganoff last night -- he knows it's one of my favorite dishes, going all the way back to childhood. (I hate to say it, but no one makes it like Mom!) We rarely eat red meat anymore -- I can't tell you the last time we had beef at home. It's been months and months, and possibly more like a year. I think the last time I ate any beef at all was when I visited Ely about a month ago and had a hamburger.

The kids are all back at school now -- they arrived for orientation days Tuesday and yesterday, and as of today we'll be back on our regular schedules. I hope I run into one particular kid at some point -- he left a jacket in the library lost & found last spring and I saved it for him in the office all summer. It probably doesn't even fit him anymore!
Posted by Steve Reed at 6:51 AM