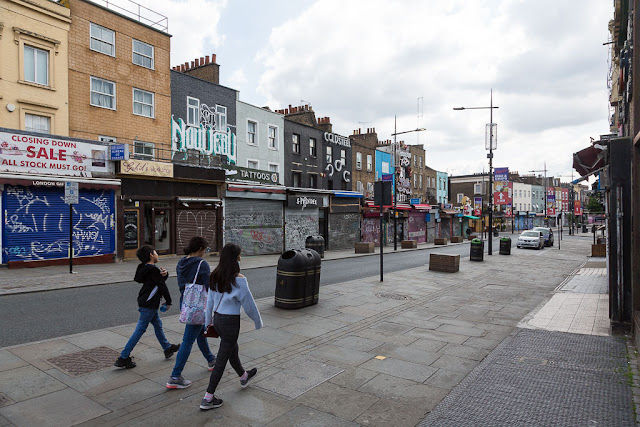 Ever since our coronavirus lockdown began in late March, I've been staying mostly in West Hampstead, wondering what the rest of the city looks like.

I decided to take a longer walk yesterday so I could see for myself. I started at home and without taking public transportation of any kind, walked down through Camden and Westminster to the Thames and back again. According to my phone, I walked about 12 miles. There were smatterings of people here and there, but shops were closed and the typically crowded tourist areas were empty. 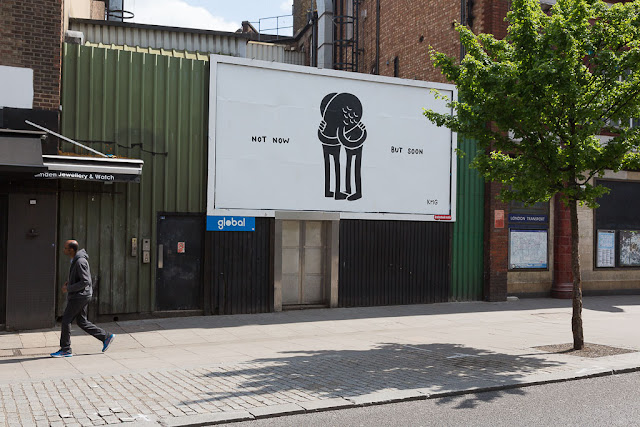 These first two photos are from Camden Town, where the sidewalks are usually thronged with shoppers. I did see long lines at the grocery stores and post office, but most other places were closed. 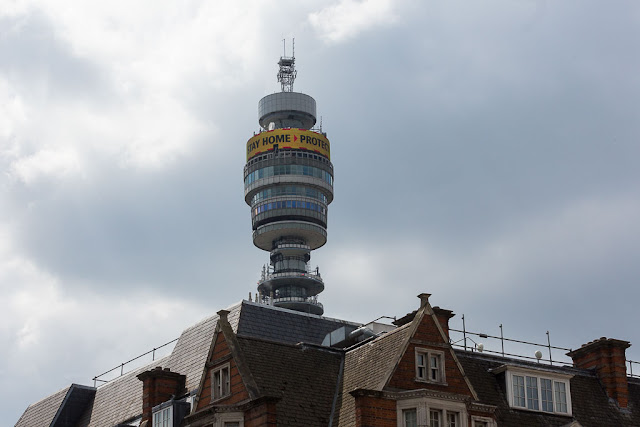 The top of the BT Tower had a circling message that said in part: "Stay home -- protect the NHS." 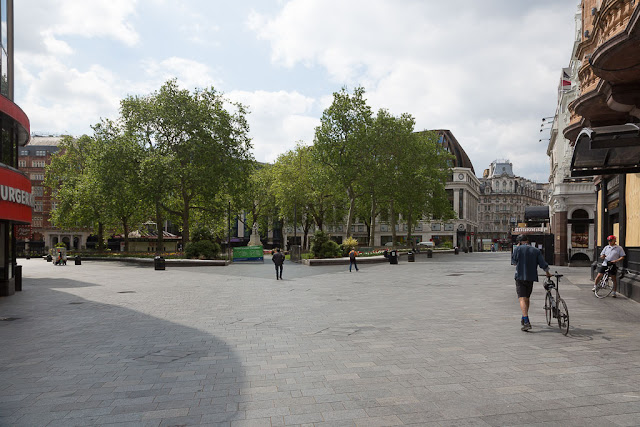 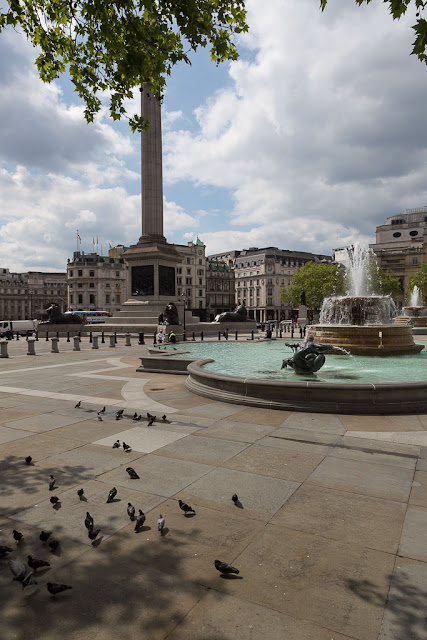 The pigeons had Trafalgar Square almost entirely to themselves. 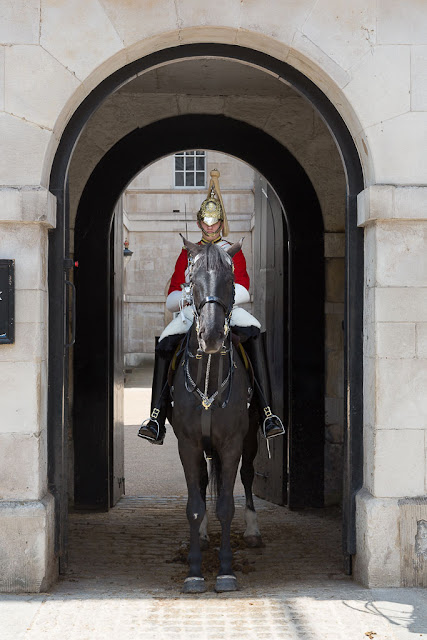 The Horse Guards on Whitehall were still on duty, without anyone to crowd around their horses for selfies. 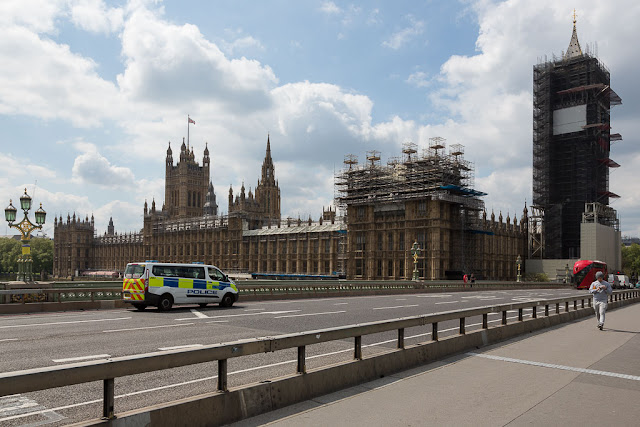 Westminster Bridge was empty of all but a few pedestrians, some of them taking pictures like me. 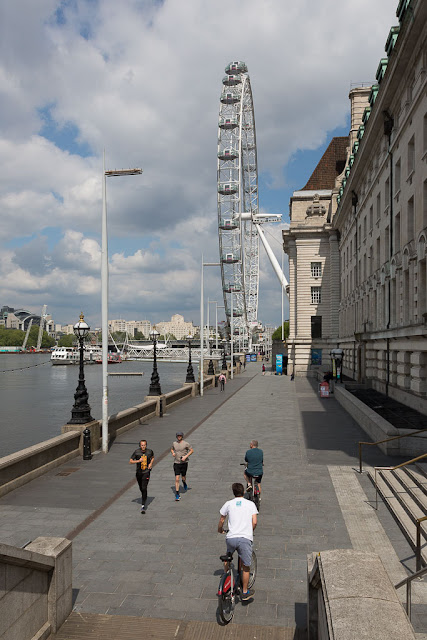 This is South Bank, an area that is usually so thronged with people that it's hard to walk through, much less run or bicycle. As you can see, a few people were out getting their exercise. The runners must love all these open streets and sidewalks. The London Eye is now closed. 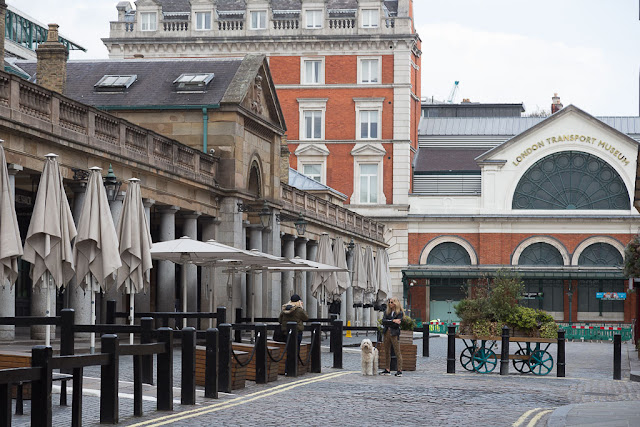 A couple of women paused in Covent Garden for a socially distant chat. 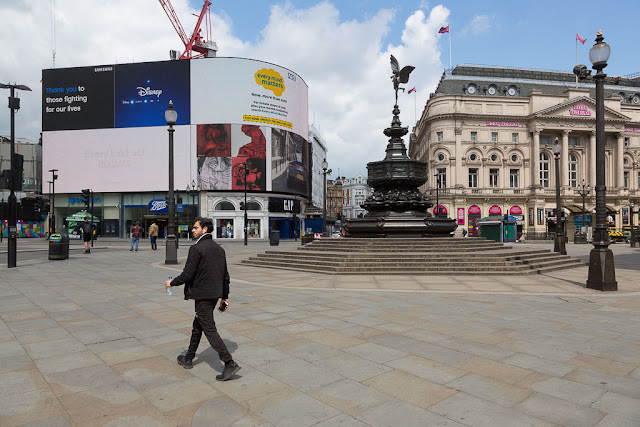 Here's Piccadilly Circus. I don't think I've ever seen the statue of Eros without hordes of people sitting on the steps around it. 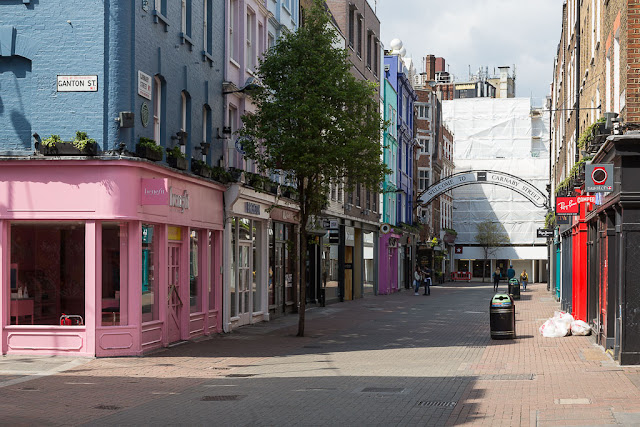 And here's Carnaby Street, a famous shopping district. You can see tumbleweeds. (Oh, never mind, those are garbage bags.) 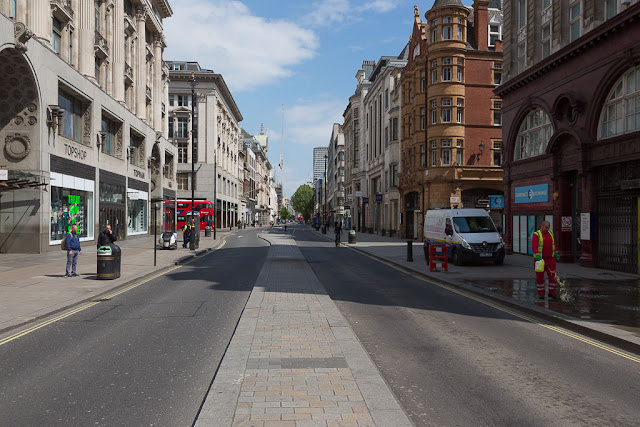 And finally, this is Oxford Street at Oxford Circus. Again, this is normally such a congested area that just walking the sidewalks is hard. Do you see the Transport For London employee at right, splashing disinfectant on the sidewalk outside the tube station? I'm not sure what good that does, really, but I suppose it can't hurt.

I felt like I stayed pretty safe the whole time. Twice, I did unthinkingly press buttons at crosswalks to cross the streets -- but I was very careful to not touch my face until I could get home and wash my hands. (Of course, I touched my camera, which then touched my face, so who knows.) And once a street-sweeping machine passed me, which freaked me out as I imagined all sorts of little virions being kicked up by its brushes. But I didn't stop anywhere to eat or drink or interact with anyone. So, fingers crossed, my extra-long day of exercise shouldn't affect me or anyone else negatively -- and I really did need a long walk.
Posted by Steve Reed at 6:41 AM