HA and AM Remembered 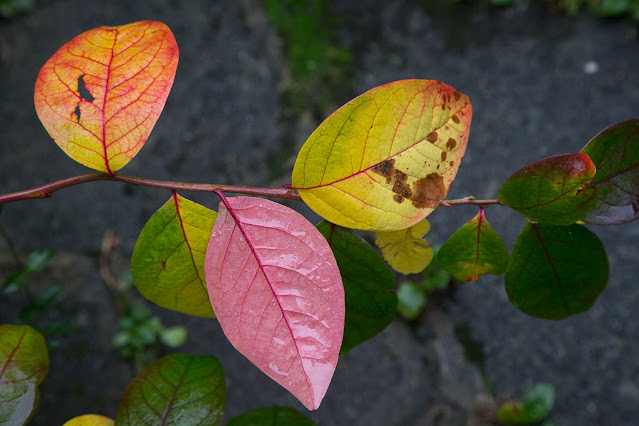 The leaves on our blueberry bush have turned a beautiful array of yellows, oranges and purples. The bush itself grew a lot this year and Dave even collected a small harvest -- enough for maybe one bowl of cereal. Still, not so bad! It won't keep us alive in a post-Brexit food apocalypse, but it makes us feel more self-sufficient.

We were talking during our walk home from work yesterday about Thanksgiving. We're thinking we won't do a big feast this year. It seems kind of silly since it's just us. Dave might make something special but I am 100 percent certain it won't be a turkey. I asked my brother if we could set up a Zoom call with him and my mom, like we did on her birthday in July. I'd love to talk to them again, but Zooming with Mom requires someone at her retirement center to work the computer on her end, so it takes some planning.

I feel guilty that I haven't been more in touch with my mom, but it's hard. She has dementia, as I've said here before, and although she sometimes answers her phone, she can't really talk much. She mostly just laughs at everything. I rarely call her because it's so uncomfortable, and my brother is certain she doesn't remember it even when I do. But at least on a video call we could see each other, which would perhaps help ground the experience for her. It's been more than a year since I was able to visit her. Covid has stolen all of 2020 away from us. 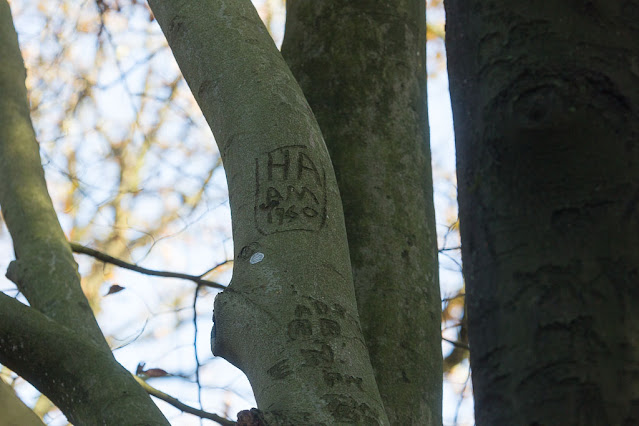 When I was on Hampstead Heath on Sunday I saw this carving way up in a tree -- about 15 feet off the ground, I'd say. Maybe it was lower when it was first carved? Or did HA and/or AM climb into the tree way back in 1960 to memorialize themselves and their couplehood? I previously blogged another carving by the same people. Vandals!

I read a fascinating news story yesterday -- a transgendered man, who was born female, stopped his hormone treatments long enough to begin menstruating again and became pregnant. After giving birth, he's gone back on hormone therapy and now wants to be legally recognized as the baby's father. It's all kind of head-spinning, but anyway, apparently he lost that battle in court. My question is, why do birth certificates need to name fathers and mothers? Can't they just name parents? Do the parents have to be gendered?

Also, Boris Johnson, who is now self-isolating along with several other government officials because of a potential Covid exposure in a meeting last week, described himself as "bursting with antibodies" and "fit as a butcher's dog." That cracked me up. I don't particularly like his politics, but he is a character.
Posted by Steve Reed at 6:50 AM