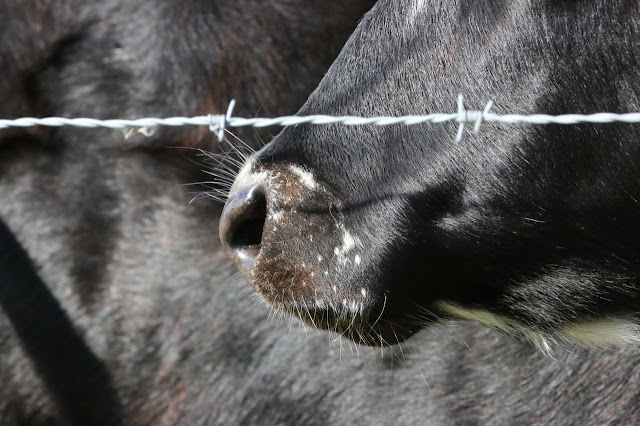 I'm at my mom's house now. The photo above describes, in a nutshell, the region where I grew up. (Yes, basically in a cow's nose.) Mom and I encountered this gal on our walk yesterday -- she and a companion followed us along a fence line, looking for a handout of grass.

So, this is it -- the last day of the year! We have no special plans. I told Mom we should just buy a bottle of wine and sit down by the lake on the dock and raise a glass or two, and then go to bed early. Doesn't that sound great? My stepbrother and stepsister and their spouses are planning to go clubbing in Ybor City, but that sounds like hell to me, so I bowed out.

I also bowed out of the LSU football game tomorrow, which they are attending. I know you're shocked. 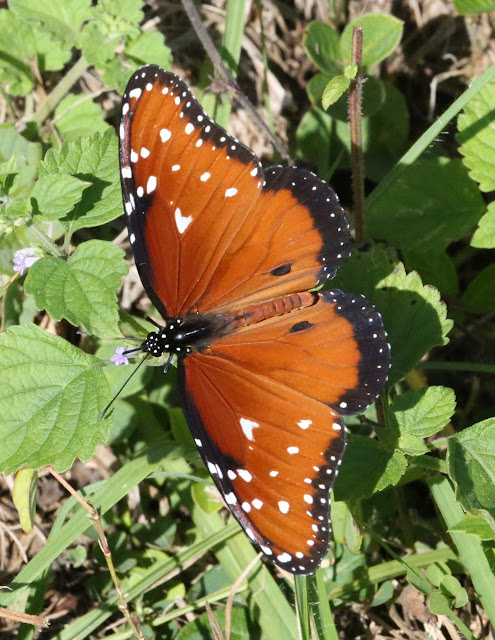 In addition to the cows, we saw some birds and butterflies on yesterday's walk. This is a queen butterfly. Doesn't it seem kind of late in the year for butterflies to be flitting around? Maybe it's another sign of climate change, or maybe they've always been here in the winter and I just forgot.

The home of one of our longtime neighborhood families, just two doors down from ours, was demolished yesterday. The new owners brought in a backhoe and knocked the whole thing down. It was your typical low-slung late '50s ranch house, with an incongruous but very mid-century bomb shelter under a mound of dirt in the yard. (I snuck into the bomb shelter once or twice as a kid. As I remember it was just a rusty metal room -- not a place I would want to spend any time.) Anyway, the property hadn't been well cared for in recent years and most everyone in that family is dead now -- they seemed to exist under a gothic southern family curse, involving unhappiness, iron-fisted control, disinheritance, you name it -- but I know it still bothered Mom to hear the crunch and crash of that backhoe. "That's a terrible sound," she said.

I reached a small blogging milestone this year -- I posted here every single day, with one extra post on the day we named Olga. Not a bad run!
Posted by Steve Reed at 11:01 AM