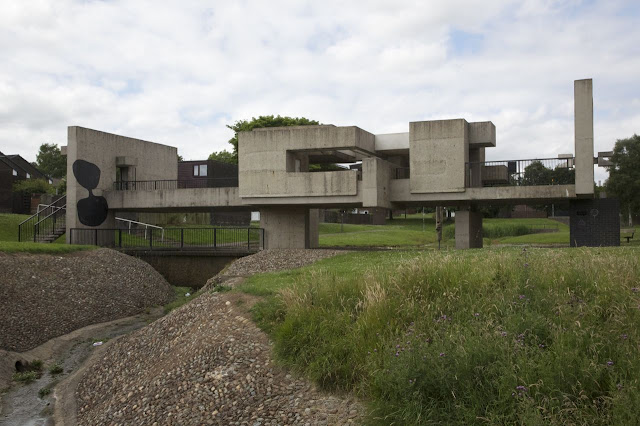 This is the structure I went up to Durham to see yesterday -- Victor Pasmore's Apollo Pavilion, built in 1969 as a massive artistic centerpiece to the "new town" of Peterlee.

Named after the NASA mission that put men on the moon, the Apollo Pavilion was supposed to act as a sort of bridge over a stream and pond separating parts of the Peterlee neighborhood known, somewhat amusingly, as Sunny Blunts. Pasmore was already an established artist when he designed it, with work in museums around the world. 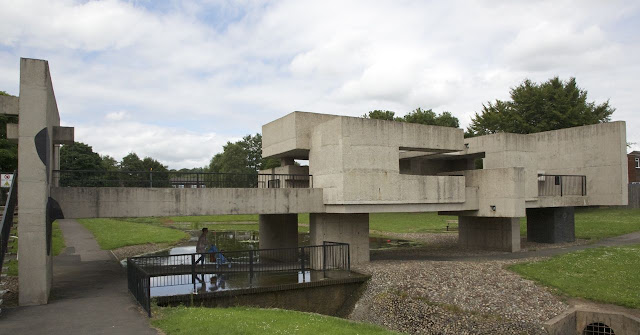 I don't remember how I first heard about this structure. I think I stumbled onto its Web site somehow. I bookmarked it in my computer and it's been there, month after month, nagging me from my bookmarks list, reminding me to go check it out.

I wasn't disappointed. The pavilion is an interesting mass of planes and angles that come together in a very pleasing way. On each end are murals of biomorphic forms taken from some of Pasmore's paintings, softening the hard edges.

You've got to admire the vision of the community planners who gave the green-light to the construction of this pavilion -- their desire to bring something unusual and artistic to a neighborhood that could otherwise have been just another big, bland housing estate. 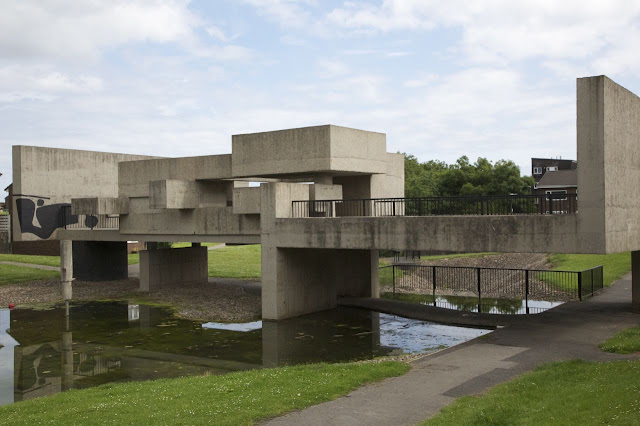 Unfortunately, not long after it was constructed, the pavilion became something of a nuisance -- a magnet for "anti-social behavior," as they say in Britain. "It is not the fact that the sculpture is a monstrosity covered with graffiti that bothers us, it is the crowds of foul-mouthed louts who hang around it looking for trouble,” one neighborhood resident complained in 1980. A year later a local newspaper reported: "A costly manmade beauty spot in Peterlee has been reduced to a shabby, rubbish strewn no-go area."

The local council struggled with what to do. Some people wanted it removed entirely, and even Pasmore -- probably frustrated by the drama -- once said that "if the council can’t appreciate a modern work of art and are not prepared to keep it in a decent condition they should certainly blow it up.”

Fortunately, that didn't happen. The pavilion was covered with soil and ragged plantings for a while, but eventually they (and the graffiti) were cleaned away and a restoration in 2009 brought the pavilion back to its original appearance. It is now a listed structure of local historical and artistic significance. 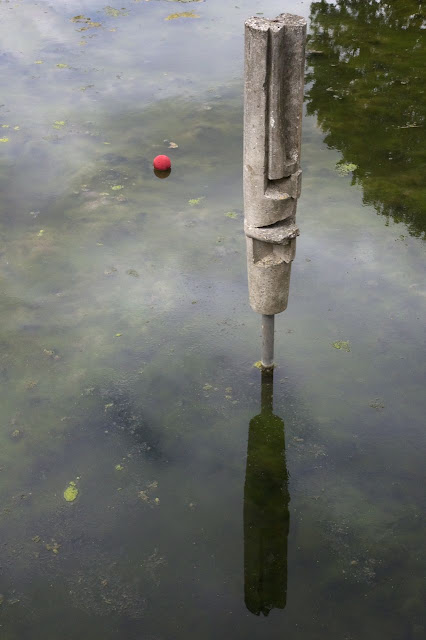 Below the structure is this pillar, one of several in Peterlee designed by Pasmore. (As you can see, despite the restoration, that shallow pond is still none too clean! Can't someone put some carp in there to eat that algae?) As I was photographing, a guy walking past told me about several other similar pillars located nearby, and I went to find them. 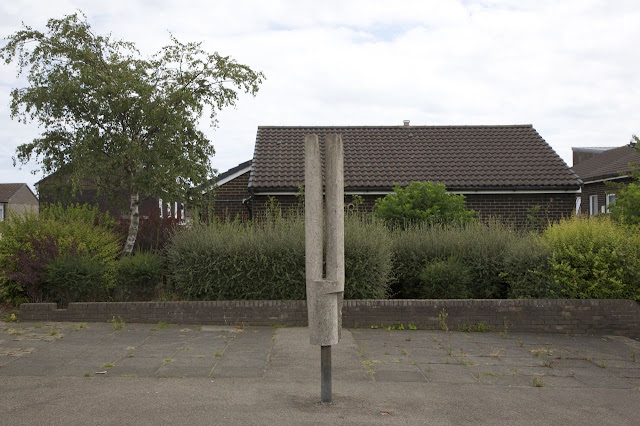 This one stands on a plaza in front of a local convenience store, where one resident told me he'd never noticed it despite living there all his life.

"What is that, then?" a woman asked me as I photographed it.

I told her it was an artwork by Pasmore. "I guess it could be anything you want it to be," I said. "To me it sort of looks like a clothespin."

I didn't succeed in finding the other two pillars that guy told me about, though I did briefly try, before catching the bus for the half-hour trip back to Durham.
Posted by Steve Reed at 8:05 AM