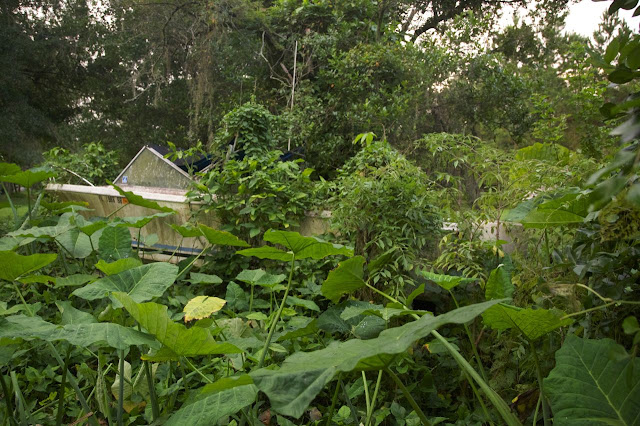 Here I am in the subtropical land of incessant rain. Apparently the area north of Tampa has seen so much recent rainfall that there's flooding in some neighborhoods -- the Anclote River is running so high that there's an inch or two of water in nearby homes. At my dad's house, we just have big brown murky puddles and some seriously jungle-ish vegetation.

My flight was uneventful, except for one small glitch -- I showed up at the airport a day early! I got to the check-in counter and the agent couldn't find my reservation. I pulled it up on my computer and noticed that although my saved itinerary gave July 28 as my departure date, the e-mailed confirmation said July 29. How this happened, I have no idea. I probably saved the itinerary before buying the ticket, and shifted the time period before I hit "purchase." In any case I felt like a dolt, and I shrank at the prospect of taking the train and the tube all the way back home only to do it all again the next day. Fortunately, British Airways was able to squeeze me onto that day's flight (for a fee, of course).

Thank god I was a day early and not a day late!

I read on the plane all the way to Florida, finishing "The Short and Tragic Life of Robert Peace," about a brilliant, economically disadvantaged kid from Newark who managed to graduate from Yale with a degree in molecular biology. Unfortunately he was never quite able to extricate himself from the drug-dealing culture of his hometown, and he floundered, directionless, after graduation, eventually with tragic consequences. The book was written by his Yale roommate with the cooperation of family and many friends, and it's riveting.

The food on the flight was OK, although I got a square of moldy cheddar. The date on the package said Sept. 12, but if they'd waited until then to serve that thing it would have looked like a cube of astroturf! I trimmed off the mold and ate it anyway. I'm no ninny.