Red-Hot Pokers and a Spa Day 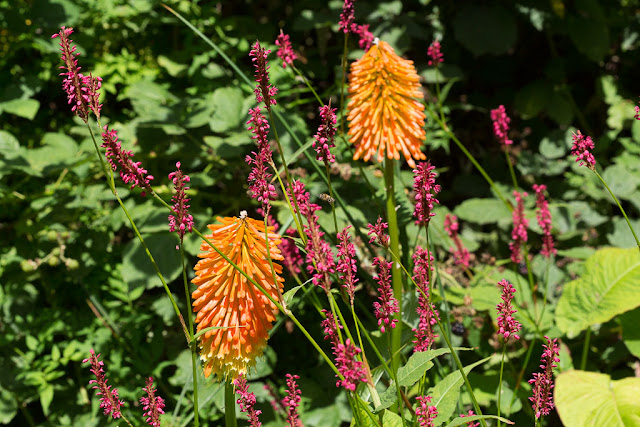 Our red-hot pokers are blooming -- they're the big orange flowers in the photo above, shown with red persicaria. We were thinking they came later this year, but now that I look back on previous posts I see that they always bloom in early to mid-August. So I guess they're on the same timetable as usual. They're one of my favorite flowers. 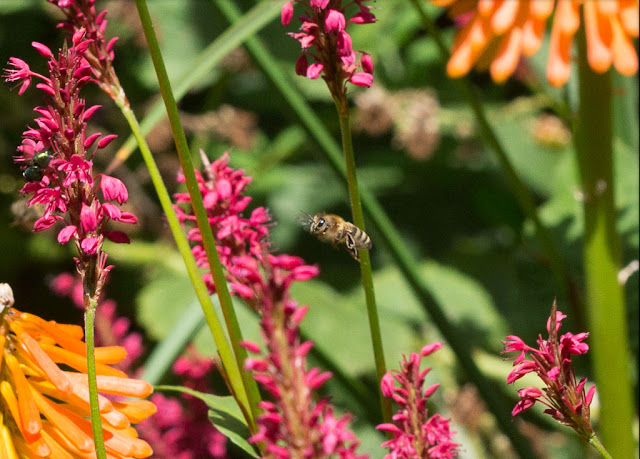 In the photo above, I caught a bee in flight -- here's a closeup. Good timing! 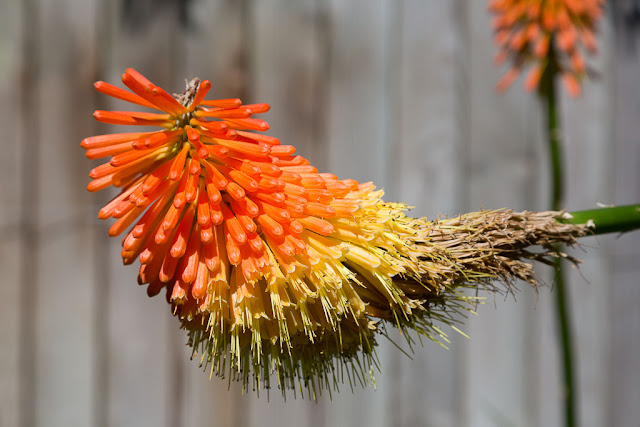 Some of the pokers got knocked around by our recent windstorm. They flopped over and then began growing upright, which led to some funky shapes.

I took Olga for a walk in the cemetery yesterday, and saw the turaco -- once again in a yew tree with berries. That must be what it's eating. It doesn't seem to feel any urgency to go anywhere!

We had a pretty good walk, although it was marred by a black poodle that chased after us barking madly -- and persisted at my heels for a very long time, while the owner sat on an increasingly distant bench, calling the dog ineffectually. It kept racing up to my feet and dropping back, and I was a little afraid it might bite me. I finally walked back to the owner, the yapping dog close behind, and said, "I really don't appreciate this!" He apologized and said the dog was trying to play, which may be true, but he needs to get off his butt and put a leash on that thing if it's going to cause such a disturbance.

In the afternoon, Dave and I had a spa day -- he surprised me with an outing to get massages and a vegan lunch in Notting Hill. Fun! He knows I've been stressed out lately because of some medical uncertainty -- I had a routine test that returned an abnormal result, so it looks like I'm going to have to get another colonoscopy, and getting that arranged is proving to be a bit of a nightmare. I thought I'd use my private health insurance to get it over with more quickly, but the insurer has a lot of paperwork hurdles that require the cooperation of very busy NHS doctors -- and the NHS, being a public, nationalized health system, just isn't designed to twiddle around with insurance forms. It's always something, you know?

Anyway, I had a 90-minute massage and Dave had a 60-minute massage and a facial. (I am not a fan of facials. My face is fine being washed with bar soap.) Afterwards we sat in a cafe beneath a large visage of the Buddha (there are always images of Buddha in spas) and had avocado toast and scrambled tofu. I think this may be the first time I've had the ever-so-trendy avocado toast -- at least, marketed as such. My mom used to make avocado sandwiches on toast when I was a kid, often with bacon. She was ahead of her time!
Posted by Steve Reed at 7:12 AM