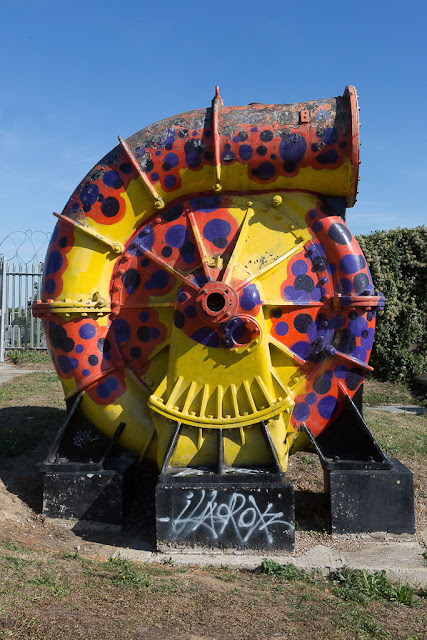 I've taken almost no pictures this week. It's been generally wet and miserable, and I haven't wanted to lug around my camera. So this is a shot from my last Capital Ring walk -- a piece of machinery (I think?) that's been repurposed as sculpture in East London. It looks like a tuba, or maybe a nautilus, but it's close to the Abbey Mills Pumping Station so I suspect it has something to do with pumping water.

So, yeah, the weather hasn't been encouraging. Wednesday was nice, but otherwise it's been cold and rainy. I haven't been out in the garden at all. I've been reading in the paper about how the UK was supposed to get "lashed" last night and today by the remnants of Hurricane Lorenzo, but if there's any lashing going on it's not here. It's as quiet as an empty church out there this morning.

(Lorenzo apparently passed far to the west of London, and is now northwest of Ireland.)

We have a tree-trimming company coming next week to give us an estimate on our annual garden cleanup. Some of our bushes -- particularly the mock orange near the patio -- are wildly overgrown. (Almost as overgrown as our front garden.) Standing on the patio, you get the sense that a green wave of vegetation is about to break over your head. It's a little unsettling. Kind of "Jurassic Park." We need to whip that into shape.

I went with some co-workers to an event last night called "Letters Live" at Royal Albert Hall. It was a general celebration of the art of the well-written letter, consisting of famous actors and other personalities reading a variety of letters -- some funny, some serious -- from the past. Participants included Olivia Coleman, Jude Law, Benedict Cumberbatch, Stephen Fry and Chimamanda Ngozi Adichie. It was a fascinating evening, and of course it made me realize that every letter I ever wrote was sadly bland and boring -- but it also made me miss letter-writing in general. We just don't put the effort into e-mails that we used to invest in handwritten letters, do we? Or maybe the writing isn't that different but e-mails just seem more impersonal and slapdash.

I have a box of old letters that I've saved, many since childhood. Some are from people long-dead, like my grandparents, or more recently dead, like my father. I never read them, but I also have no intention of discarding them. They contain a little bit of each person, a bit of voice. Just having them around makes me feel connected to those people. 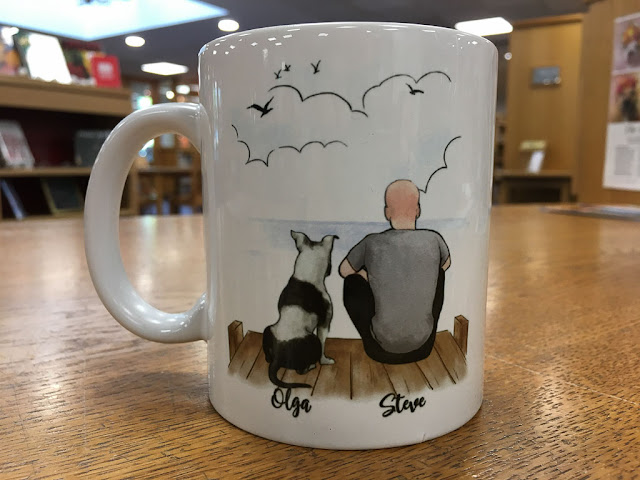 This was a present from Dave, waiting for me when I came back from Florida. Isn't it great? Olga's marks aren't quite right -- she has a round spot in the center of her back -- and I'm not sure when we've ever been sitting on a dock. But that's quibbling, because overall it's a darn near perfect representation of both of us. On the other side it says, "I can't. I have plans with my dog." He ordered it through Facebook, and the creators will adapt that image to look like any dog and owner. I've been using it at work and showing it off to everyone.

Speaking of which, I hope the weather gets better this weekend so I can take Olga on an adventure. We both need it! I think Saturday's supposed to be relatively dry. Fingers crossed!
Posted by Steve Reed at 6:51 AM