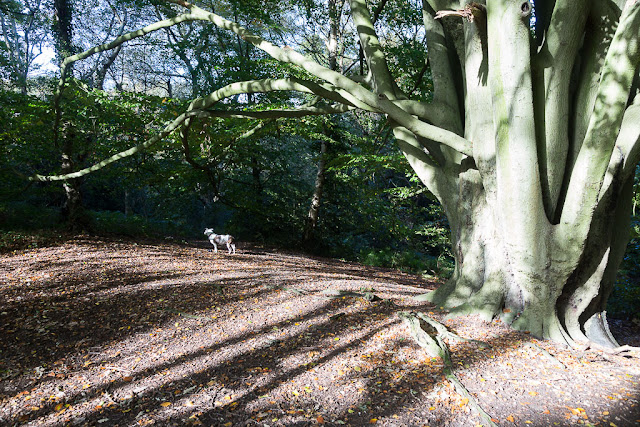 Yesterday we encountered what's lately become a rare commodity -- sun! I took Olga to the Heath for a good long romp.

Although many of the trees are still green, or just going yellow, the light seems different at this time of year -- mellower, with long shadows. 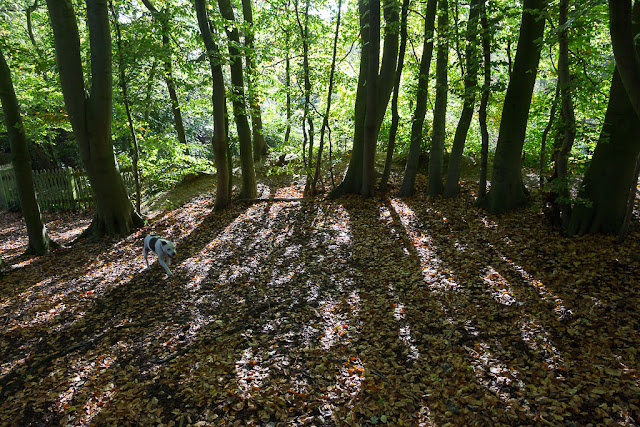 Olga, of course, ran around like one of Pasteur's mad dogs. 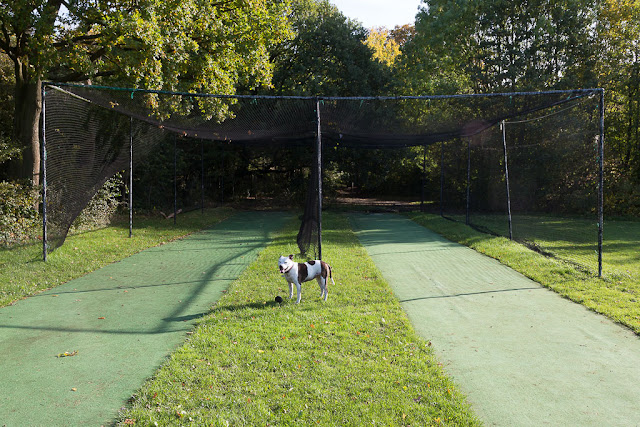 We paused for a quick photo beside the cricket batting cages on Hampstead Heath Extension.

Olga lost her tennis ball while chasing and barking at a squirrel. That's no big deal -- she's got a million of 'em. But then, tragedy! While walking through Golders Hill Park on the way home, she dropped her Kong, and it rolled under a fence and down a small hill into a pond. I have retrieved that Kong from all manner of disgusting and awkward places but I just didn't have it in me to go after it -- at least, not immediately. So as I write, it's still in the pond, and we are Kongless.

(I must admit, though, that I'm hatching a plan to go back for it. We'll see.)

Dave and I went Saturday night to hear the Royal Philharmonic Orchestra perform Carmina Burana at Royal Albert Hall. We went with a bunch of other teachers -- we had access to free box seats provided by one of the families at school. (Woo hoo!) Most of us know Carmina Burana's opening and closing piece, "O Fortuna," and for years I've believed it was the music used in the film "The Omen." (I even blogged that the last time I saw Carmina Burana, when I lived in New York.)

Inspired, Dave and I rented "The Omen" yesterday. And no, the music is not "O Fortuna," although it is choral and has a vaguely similar disquieting sound. (Apparently "O Fortuna" has been used in many other movies over the years.)

Finally, I also have to correct something I said in yesterday's post -- I discovered via Google Street View that the old Kapok Tree Inn in Clearwater was not entirely demolished. Parts of it still stand, and for years it's been a music store and apparently a wedding and event space. Most importantly, the large kapok tree that stood outside the restaurant is still around!
Posted by Steve Reed at 6:50 AM