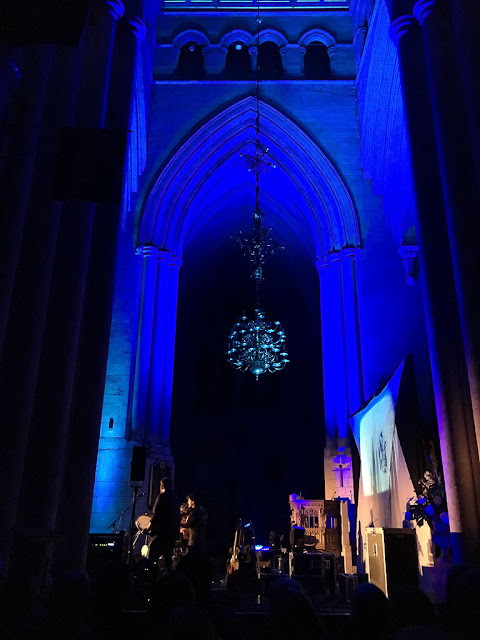 Last night I went with Sally, Mike and Liz to see Seth Lakeman, a singer-songwriter from Devon whose latest album is all about the pilgrims on the Mayflower. The concert was in Southwark Cathedral, which was an interesting venue -- apparently Southwark was connected to the Mayflower's story, as were several other locations that inspired songs on the album. He also sang of the North American Wampanoag tribe, which of course was devastated by the pilgrims' arrival.

We were seated to the side of the stage, in one of the transepts, so I couldn't fully see the screens behind Lakeman, where some animated images were projected during the show. I also had a terrible time understanding him -- maybe something about the acoustics or, again, where we were sitting. (Or my ears.) But I could appreciate the music and I could hear the narration, so I got the gist of things. 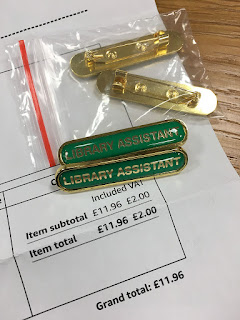 Sally and I saw saw Lakeman in concert once before, three years ago. (Time flies! It seems much more recent than that!)

Before the show we went to dinner at a Middle Eastern restaurant in Borough Market. I like Middle Eastern food when I'm in the Middle East, but it's not usually something I'd search out here -- the small-plates and sharing thing can get a little, I don't know, fatiguing. Sometimes you just want your own food, you know? But this was good -- tabbouleh and halloumi and kebabs -- so ultimately I warmed to it.

See those little pins to the left? The ones that say LIBRARY ASSISTANT? They mysteriously showed up at work yesterday morning, with an invoice indicating they'd been ordered via Amazon on Saturday. Weirdly, though, none of my co-workers ordered them. They were addressed to our school and seemed to use information from our Amazon account, but there's no trace of the order in our online history. It's the strangest thing!

I'm thinking either we got some other library's order, or someone sent them to us as a promotion. (Strange that they'd include an invoice, though.) We weren't immediately able to tell whether they'd been billed to our credit card, but I doubt it. If the order isn't in our history then I'm thinking it was paid by someone else.

Anyway, we're not going to use them, thank goodness. I think I might balk at having to wear such a silly thing. After all, if I'm sitting behind the desk, checking out books and wearing my school ID badge, wouldn't it be stating the obvious?
Posted by Steve Reed at 6:37 AM