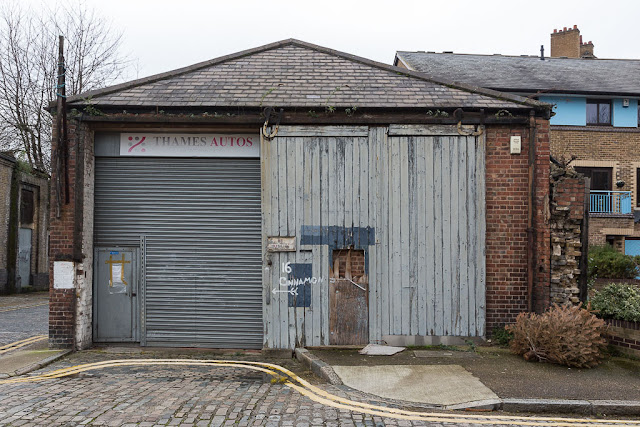 Yesterday was spent catching up on things and getting some rest. I made a quick trip to work so I could pick up a package (we have everything shipped there because someone's always around to securely receive it) and I checked in a few returned books.

The package contained a red glass vase that I ordered from an antique shop in Oklahoma. It's identical to one my grandmother used to own that my brother has now. I was reminded of it while watching the new Star Trek show, "Picard" -- one of the characters drinks out of one. Anyway, I always loved Grandmother's and now I'm glad to have my own. (They were made by Anchor Hocking decades ago but they're not expensive.)

In the afternoon, Dave and I went to the high street so he could use one of his Christmas presents, a gift card from the local cook shop. He wanted an oval gratin pan, but of course they didn't have one in stock. I like the idea of supporting local merchants, and I always try to do that, but this is the downside -- unlike the Internet, they sometimes don't have what you want! (And yet they did have an entire wall of reusable water bottles, which seemed excessive in such a small store.) Anyway, they're looking into whether they can order Dave's pan. 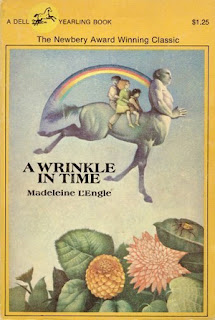 I've worked my way through all but two books from my February Break reading stack. I read "A Wrinkle in Time" and "When You Reach Me" on my overnight trip to the beach. I first read "A Wrinkle in Time" when I was in the fifth grade and loved it. A friend of my mom's loaned it to me, and I distinctly remember the cover (image at left, found online).

Our library copy looks entirely different, but of course I still enjoyed it. It's so interesting to re-read a childhood favorite as an adult. What was a very rich book as a kid seems a bit slim now, and there were elements I didn't detect before -- several religious references, for example. (Apparently L'Engle was quite religious herself, in a liberal New England way.) There's a very clear light vs. dark, good vs. evil, anti-authoritarian theme. I loved how she gave us just enough science to make time and space travel seem feasible, and I remembered some secondary characters, like Aunt Beast, quite clearly. Five stars!

"When You Reach Me" is a Newbery winner from several decades later that refers back to "A Wrinkle in Time," and even has a plot somewhat inspired by it. So it was fun to read it immediately afterwards. Also five stars!

We got more rain yesterday, two gusty storms that blew through in the afternoon. The garden is certainly not lacking moisture.

(Photo: A garage on Cinnamon Street in Wapping.)
Posted by Steve Reed at 7:10 AM