Children's Television and Repaying a Debt 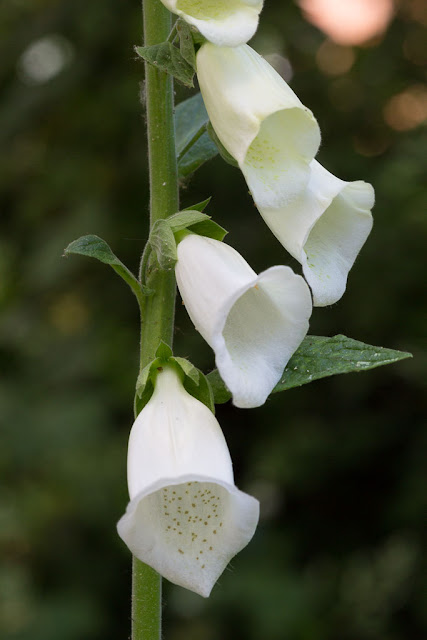 Here's another of our foxgloves, grown from seed -- this one white! So now I have three colors of foxgloves from a single seed packet.

I worked in the garden yesterday and got our new plants in the ground. And then I went to the grocery store and bought yet another one, but this was purely a lifesaving measure. The plant, a blue lupine, needs some serious intensive care. Its main stalk was broken, the flower dead, the leaves withered and bent, and it was infested with aphids. It was originally priced at £17 (insane!) but I got it for £2.99. I brought it home, treated the aphids with soapy water, trimmed away the dead stuff and now we'll see what happens. If it survives it probably won't bloom until next season, assuming it overwinters successfully. It's a long-term project.

While at the grocery store, I indulged in more experimental shopping. I bought a package of pre-cooked Scottish mussels in white wine and cream sauce. We weren't initially certain that they were pre-cooked, and Dave thought they might kill us -- because how could live mussels survive in a sealed package with white wine and cream sauce? But I said, "Surely, if they're for sale at Waitrose, whoever packaged them knows what they're doing." And then we read the fine print, and yes: pre-cooked. We ate them last night as an appetizer and they were fantastic. I'd buy them again. (Our Santa Claus melon was excellent too, I'm happy to report.)

Remember those cans of baked beans I took from the food donation box at school? You'll be happy to know I'm making good on that debt. I assembled two "essential food parcels," each containing about £20 worth of canned and non-perishable goods, which I am donating to a food drive for people who are self-isolating and unable to shop. They're supposed to be picked up tomorrow. 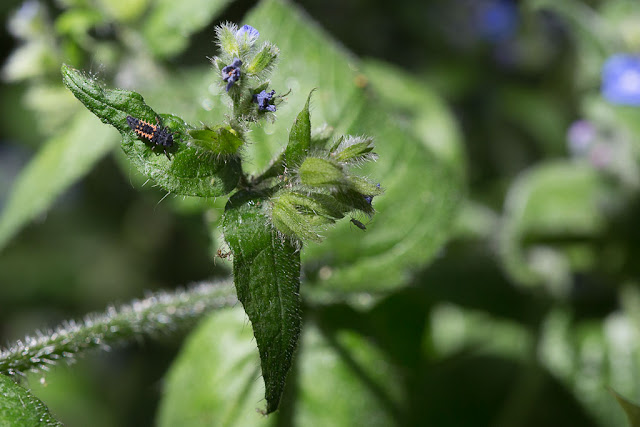 While sitting on our garden bench I saw a little ladybug (ladybird) larva wandering aimlessly across the wood. I put it on the borage behind the bench, where there are lots of aphids. It's the first larva I've seen this season.

I sat out reading, catching up on the unstoppable avalanche of New Yorkers coming through our letterbox. One contained an excellent article about the origins and significance of the children's TV show "Sesame Street," which first aired 51 years ago. I was part of that first Sesame generation. My mom said she sat me down in front of the TV -- I had just turned three -- and I was absolutely enthralled. She knew it would be a success, based on my reaction. (She went to high school with Jim Henson, although she didn't really know him. That might be why the show was on her radar.)

And speaking of children's television, Dave and I watched "It's a Beautiful Day in the Neighborhood," a movie based on a magazine writer's assignment to profile Mr. Rogers, last night. We enjoyed it. We're trying to catch up on recent movies and finding that a lot of them are becoming available to stream. We watched the most recent "Star Wars" (meh) and the excellent "Bombshell," about the Ailes-harassed women of Fox News. "Misbehaviour" is still on our list, as is "Parasite," which becomes available June 1 through Curzon online cinema. 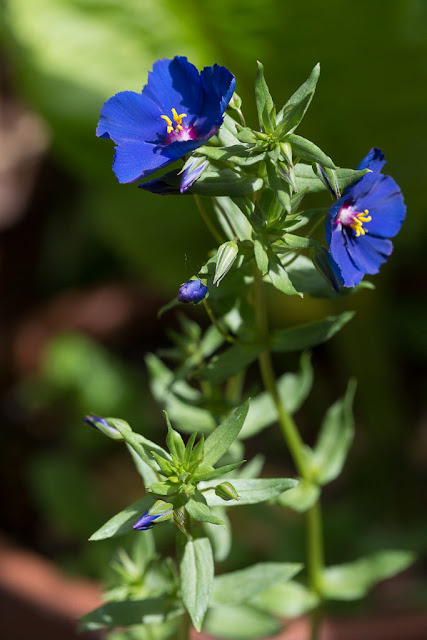 Several weeks ago, just as this whole coronavirus thing was beginning, I had a consultation with my doctor. He wanted me to get a blood test and some other tests, but I delayed them all to stay out of the COVID-19 fray. I recently scheduled the blood test, finally, and I was supposed to go yesterday. But I still feel uneasy about walking into the Royal Free Hospital -- the belly of the viral beast -- for something so non-essential. So I cancelled it. I'm going to wait a while longer.

Above are our skylovers, a type of pimpernel -- we're down to just one little plant, from the original five, but it's lasted four years now! Pretty impressive for something that's usually grown as an annual.
Posted by Steve Reed at 7:17 AM