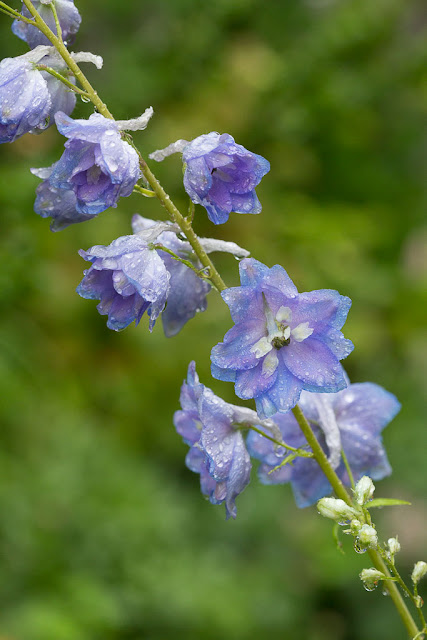 Yesterday's rain was the ideal type for the garden -- long, steady, soaking. Some of our plants got a bit weighed down by the water, like the delphinium above, so I went out during a pause and staked a few of them. Otherwise I didn't leave the house all day.

Olga, however, got her walk as usual. When Francisco brought her back he called into the house from the doorway, "She's a little bit wet!" Which turned out to be an understatement -- she was wet and dirty. But that's fine. I gave her a bath and all was well. 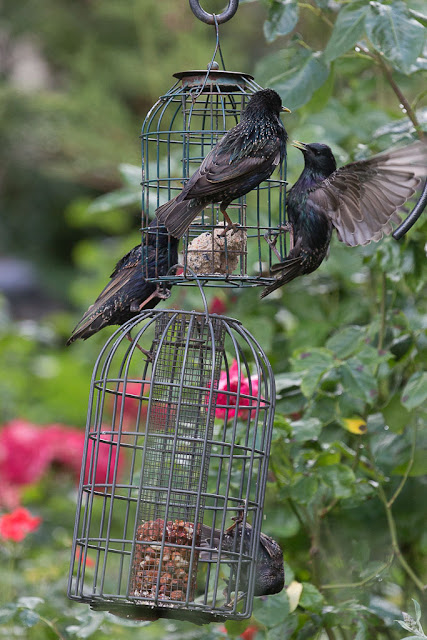 Some starlings on the bird feeders had a big noisy squabble in the afternoon. 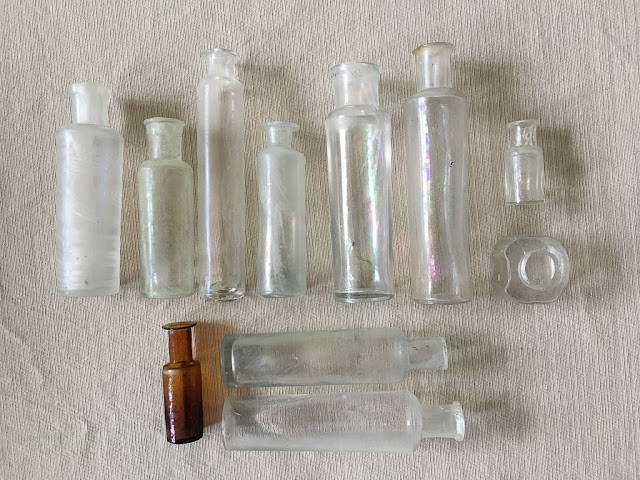 Remember those antique bottles I found in the trash on my way to work several weeks ago? Well, I put six of them in a little row on our windowsill, but the rest have been wrapped up and sitting in the dining room all this time, and I finally decided I need to move them along. So I listed them on eBay! I haven't sold anything on eBay for years -- maybe even decades -- but it seemed a good way to find them a new home and ensure they won't simply get discarded again. I listed both the medicine bottles (above) and the Bovril bottles. I set the starting bid at £1 because I simply want to find them a home, not make a killer profit -- and someone already bid on the medicine bottles!

I also bit the bullet and went on Amazon and bought some masks to wear when I go shopping. The mayor of London has said we should wear them in shops now that more of them are reopening. The national government has still said basically nothing, but I guess I have my head in the sand given that all over the world people are adopting them and I may as well get on the bus. (Block that metaphor!)

Bravo to the Supreme Court for pulling the USA back from the brink of insanity! The ruling protecting LGBT people under existing anti-discrimination laws was, of course, fabulous, and the DACA ruling makes me so happy because it's a big ol' finger in Trump's eye. Checks and balances, baby! Many Americans have believed for years (wrongly) that federal laws already protected LGBT people from discrimination, so this makes their mistaken assumption official.

Speaking of LGBT issues, J. K. Rowling has been in the doghouse lately for voicing her concerns about transgender issues. Some people seem to think Rowling, who is generally quite progressive, has gone to the dark side by expressing skepticism about trans cultural orthodoxy. I honestly think a lot of the hostility aimed at her comes from people who haven't read anything but Twitter. Rowling herself wrote a long essay about her beliefs that I found quite compelling.

I absolutely support transgender people -- the right of anyone to live, free from discrimination, as the gender they believe themselves to be. I think Rowling does, too. But among other things, she's worried about young people who may want to transition before they're really ready -- and as a gay man, I completely understand that concern. I think a lot of young gay boys (and probably girls) go through developmental periods when they identify with the opposite sex -- I know I did. That might manifest as a desire to transition rather than coming to terms with what it means to be gay, and the social baggage that goes with that. (Not that there isn't also social baggage with being transgender!)

I also get her concerns about women. As she said, "one of the objectives of denying the importance of sex is to erode what some seem to see as the cruelly segregationist idea of women having their own biological realities or – just as threatening – unifying realities that make them a cohesive political class." It makes sense to me that some women would question whether women who used to be men really understand women's perspectives, their lived experiences and their political and social goals.

Anyway, it's a super complicated issue, and I don't have the answers. But the bottom line is, I don't believe Rowling is the enemy. Read her essay, if you're at all interested. (I think her concern about changing rooms is a bit of a red herring.)

Finally, I was sorry to hear that Vera Lynn died yesterday. Just a few weeks ago, around the time of VE Day, I was marveling that she was still alive!
Posted by Steve Reed at 6:40 AM