Remember contact sheets? Back when photographers used film, they'd develop the film and then print the whole roll by laying the negative strips on photographic paper and exposing the paper to light. That way they could get a quick look at all their shots, and they could tell which ones were worth printing larger.

Obviously, these shots were taken digitally. But when I put them into iPhoto I couldn't help but notice the similarity to a contact sheet.

As you can tell, I was taking pictures of the back of Olga's head. I love the way her lopsided ears look from behind. Which frames would you print? I like the second-to-last one, but unfortunately it's blurry, so that one's out.

I finally went with number 7: 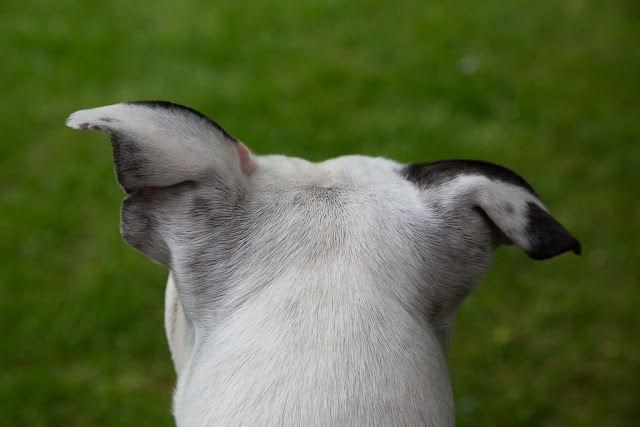 You can tell she's a goofball, just by the set of her ears.

Speaking of photos, I hit the 30,000-photo mark on Flickr yesterday. It's kind of insane, isn't it? To think that since 2006, when I joined Flickr, I've uploaded 30,000 pictures. If I didn't tag and organize them online, I couldn't keep track of them all. 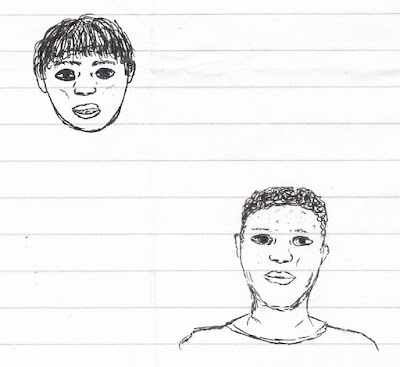 And speaking of heads, I found this doodle on the sidewalk next to a trash can in West Hampstead. What do you think is going on here? Are these real people? Friends? Relatives? Convicts? A short story is begging to be written. That guy at the top either has two black eyes or some serious eyeliner.

I had a new celebrity sighting yesterday morning! He was having a chat with one of our famous neighbors at the neighbor's front garden gate. A bit of excitement for an otherwise uneventful day. (Follow the links for identities -- I try not to blog names so I don't wind up on the celebs' Google news feeds.)
Posted by Steve Reed at 6:34 AM