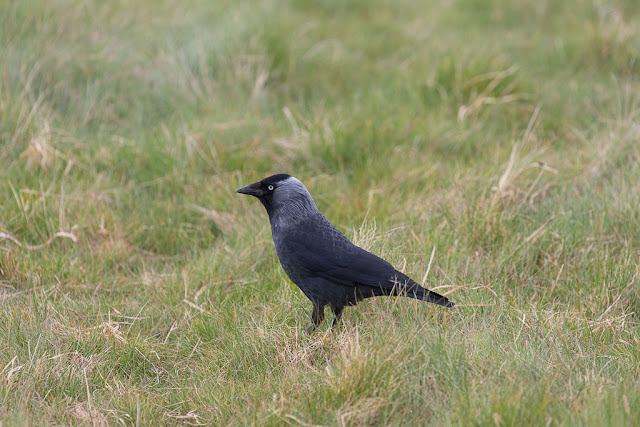 I saw lots of these black-capped, gray crow-like birds when I was in Richmond Park last week. I had to Google them to figure out what they were -- I'm not great at identifying corvids -- but I believe they're jackdaws. 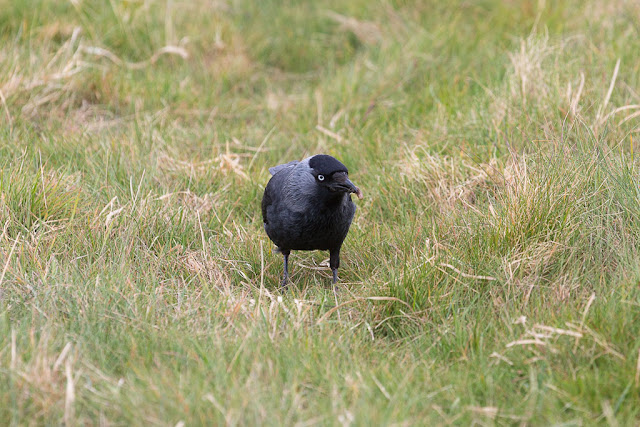 This one was hopping around on the ground pulling grubs out of the grass. It found two during the short time I watched -- an effective hunter!

Speaking of grubs, I've been wrestling with what to do -- if anything -- about the moth pupa I pictured yesterday. I considered bringing it inside and pupating it in a container, both to see what kind of moth it is and to protect it. (I suspect it's an angle shades moth, and I'm still convinced it's not supposed to be lying on the surface of the ground like that.) But in the warmth of the house, I suspect it would emerge too early -- earlier than its food sources or the other moths it needs to mate. So I'm leaning toward leaving it where it is. Nature can handle the job, right? And if something eats it, well, that something needs its food too.

I finished the library inventory, and remember how I said I thought we'd be down about 30 books? Well, that's exactly where we ended up, with 30 missing books. Most of them are fiction, and most of them aren't anything that needs to be replaced, at least not immediately. (When's the last time anyone read "The Hunt for Red October"?)

Some of you suggested we get an "amnesty bin" where late or missing books can be returned no-questions-asked. We already have a return bin where people can leave things anonymously, so that serves the purpose, I think.

I did comb some 5th-grade classrooms for missing or overdue items, and found a small stack. Several years ago one of the teachers checked out a big art book on Vermeer and months later professed not to have it -- and not to even remember it. (This is not an uncommon situation!) So we marked it lost and left it at that. Well, what do you think I found behind a cabinet in her classroom, where it had obviously fallen ages ago? Four years overdue, but better late than never.
Posted by Steve Reed at 6:11 AM