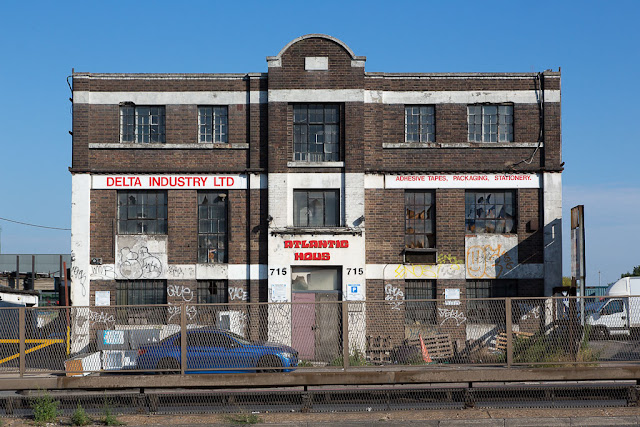 I took this photo last summer during a walk through the Brent Cross area, north of where we live. I'm posting it now because this building made news yesterday -- it was consumed by a huge fire. Apparently one person died. The fire closed the North Circular, which is a major highway running right in front of the structure. Quite a bit of excitement, and when I saw it on the news, I thought, "Hey, I know that place!"

My stepmother came over for dinner again last night. She doesn't fly out of London until this morning, and I didn't want her hanging around in some hotel on her last night here, so Dave cooked for her and we spent another evening together. I went down to Mayfair to collect her after work, and rather than ride the tube back right away (in the middle of rush hour) we had a drink in the bar at the Intercontinental Hotel -- a gin creation called a "Prudence" involving basil and something else. It was pretty good, but the name is a bit odd for a cocktail, since it seems most prudent not to drink booze!

The tube was perhaps slightly less crowded by the time we got on, and we had a nice time hanging around here and talking about home and family -- particularly my late father's complicated, mathematical mind. June's house is full of mysterious little wall niches and unusual pipe fittings and other things that he created, and sometimes we can only guess at their original purpose.

We're at that time of year again when the sun rises ridiculously early and sets fairly late. I woke up about 4:30 this morning and it was already getting light out. It's hard to get back to sleep when the sun is telling you otherwise! (And I suppose we should be living our lives by daylight rather than artificial clocks anyway, right?)
Posted by Steve Reed at 5:56 AM