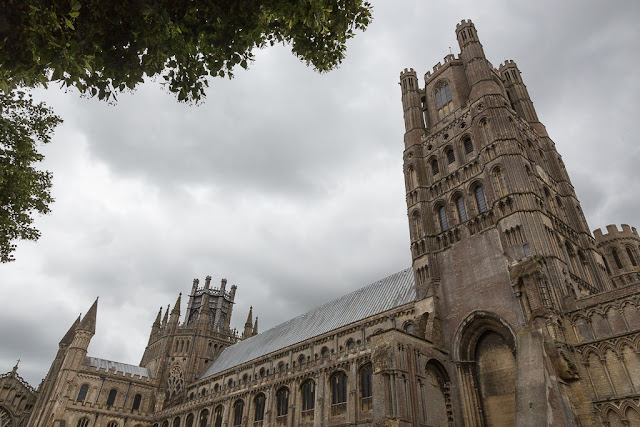 I took a little day trip yesterday to the city of Ely, about 14 miles northeast of Cambridge and a little more than an hour north of London by train. I've long wanted to see Ely (pronounced "EElee") because I've been told that my ancestors came from that part of England, hundreds of years ago. I think this was something my grandfather learned doing genealogical research, although I don't have any of the evidence at my fingertips now.

Ely is most famous as the site of a grand cathedral (above), parts of which date from about 1080. The cathedral was the focus of most of my visit, but I also had a chance to wander around the older parts of town and pop into a few charity shops. (I got a blue short-sleeved shirt covered with silhouettes of birds in flight -- £3.50!) 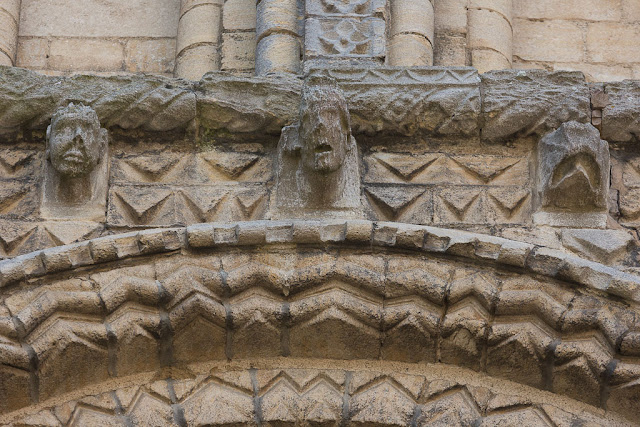 I was struck by the gargoyles on the outside of the cathedral building. Some were very weathered, while others were obviously more recent replacements. 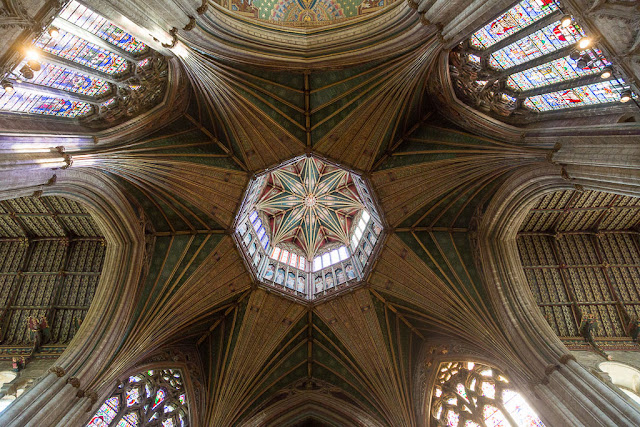 Inside, the ceilings were magnificent. Ely cathedral is known for its unusual octagonal tower at the center of the building, where the nave and transepts come together. You can't really get a sense of the space encompassed by the photo above, but it's vast -- you're looking up into the tower in the center. 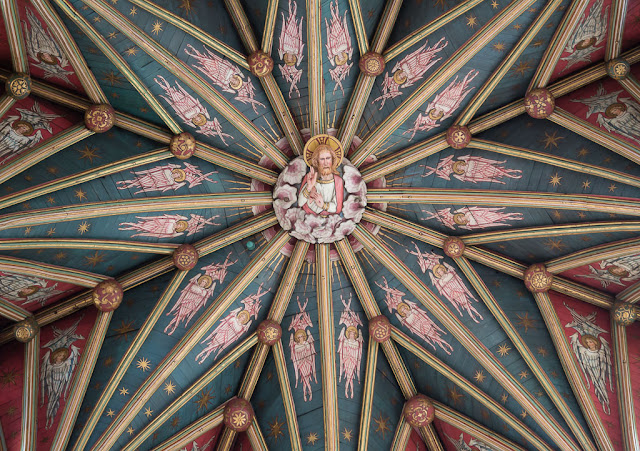 Here's a close-up of the ceiling of the tower, featuring John of Burwell's painted portrait of Jesus. 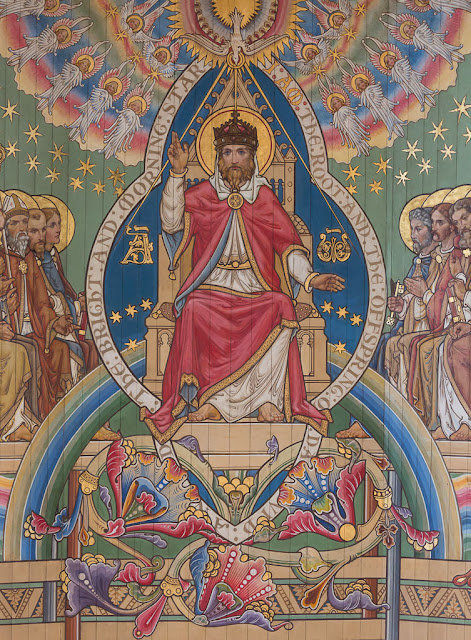 The ceilings of the nave are covered with Victorian-era paintings by Henry le Strange (what a great name!) and Thomas Gambier Parry. This is just a tiny piece of the whole. 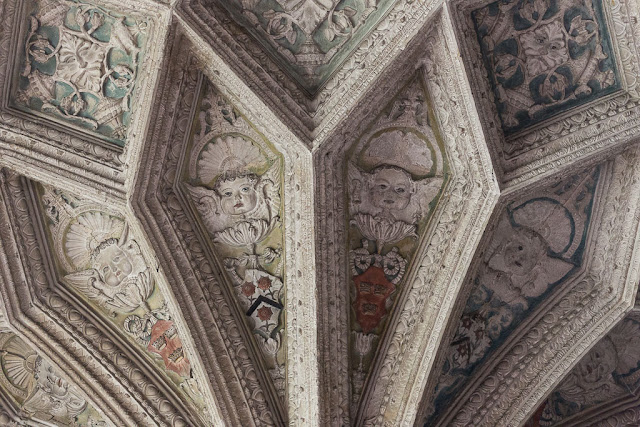 In Bishop West's Chapel, there's an elaborately carved ceiling from the Renaissance. 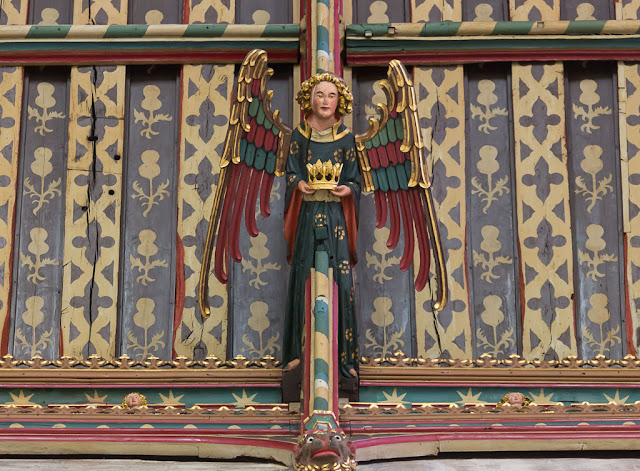 And in the north and south transepts, the 15th-century ceilings include sculptures of flying angels. (You can see these ceilings at the left and right of the big interior shot above, to put them into context.) 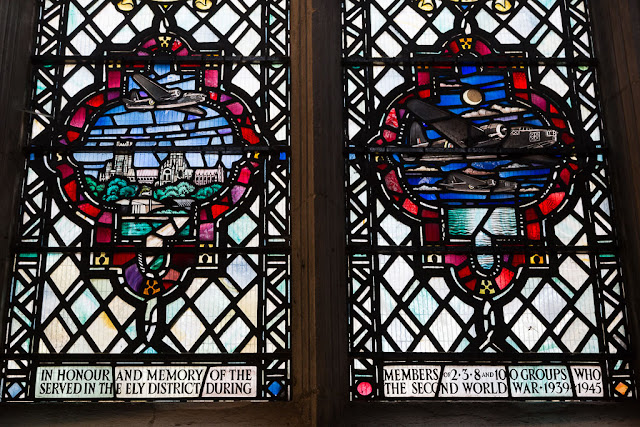 There's a lot of beautiful stained glass, including this unusual window depicting World War II aircraft flying over the cathedral (left) and the moonlit ocean. It's not often you see airplanes in a stained glass window! 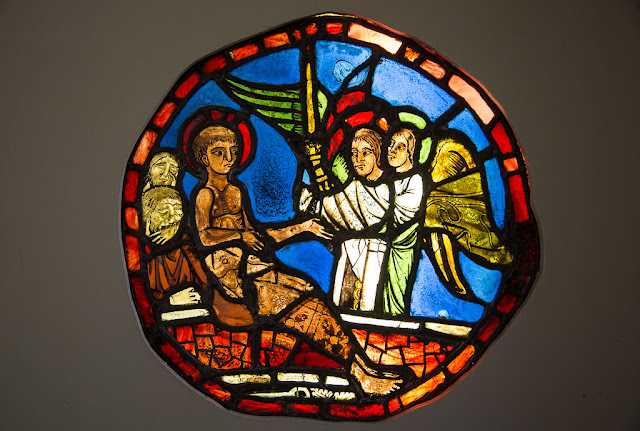 Obviously the airplane window is modern, but there's an excellent stained glass museum inside the cathedral featuring much older examples of the craft. This little round window is from the mid-1200's and depicts St. Vincent being consoled by angels. 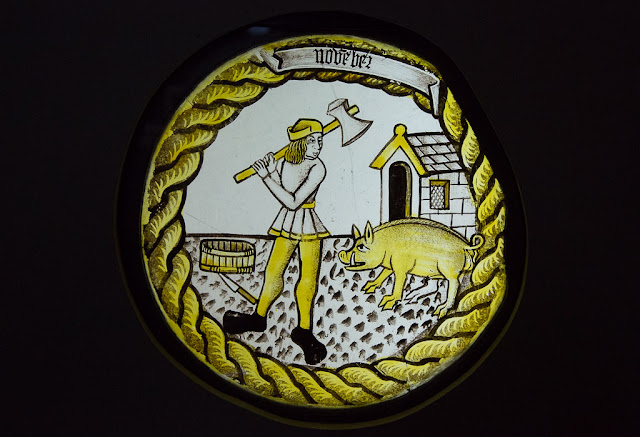 And this window from the 1400's is part of a series depicting seasonal labors -- here's the job for November, slaughtering the animals before winter. (The pig looks suitably nervous.) 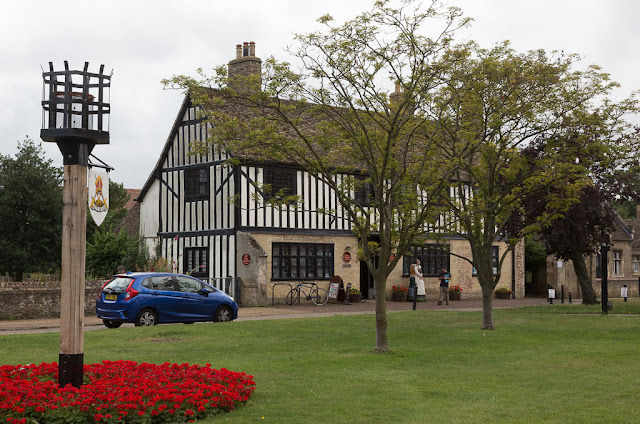 After touring the cathedral, I had lunch at the adjacent Minster Tavern. I just wanted a pint and a hamburger, but when I ordered, the server asked, "Do you want a double, triple, or quadruple burger?"

"No, we only do doubles, triples or quadruples."

Good grief, what is this? America? I ordered a double and figured I could take a patty home for Olga if it was too big. But as it turned out, the patties were small and I managed the double just fine. I was also asked to choose from myriad specialty sauces, but successfully opted for just mustard and ketchup.

Perhaps inspired by my spartan lunch, I then went to take a quick look at the former home of Oliver Cromwell (above), the Puritan leader who helped overthrow the English monarchy in the 1600's. Visitors can go inside, but I didn't. (It's weird to see Oliver Cromwell's house with a Honda parked in front, isn't it? Although I suppose if Cromwell drove he'd choose something like a Honda.) 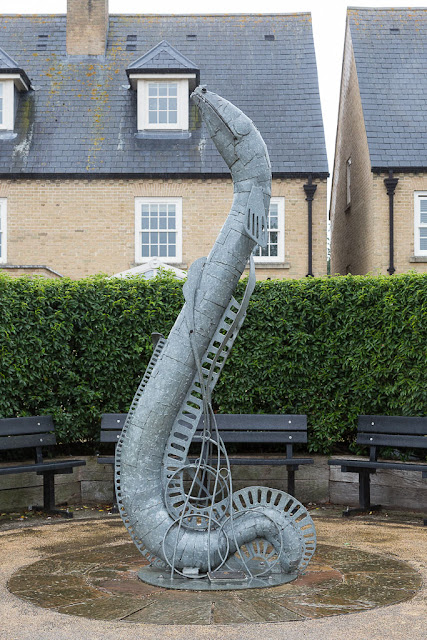 Ely's name comes from the eels living in the waterways and marshes around the city. (The city itself was built on a clay "island" surrounded by wetlands known as fens, which have since been drained for agriculture.) This 2005 sculpture of an eel by Peter Baker stands in a park near the River Great Ouse.

It began raining in the afternoon, so I spent an hour or so in a huge antique store near the river, browsing among shelves of books, china, knick-knacks, and stacks of furniture. I saw lots of amazing stuff but I bought nothing. We've got enough as it is.

I caught the train back to London around 3:45, happy to now have a sense of my ancestral home!
Posted by Steve Reed at 6:45 AM